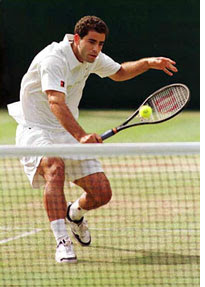 *The Net Game is ultimate attack in tennis
In today's game, you don't see the dominance of the Net Game, also known as the serve-and-volley game, that we once saw not too long ago with players such as Pete Sampras or Tim Henman.

Part of the reason is probably because tennis is being played much more often on faster and harder courts which less conducive to serve-and-volley. In earlier days, when for example three of the four Grand Slams were played on grass, the game was slower and thus better suited for serve-and-volley.

I think that the advance of today's "power tennis" also makes it more difficult for players generally to come to net easily and quickly, at least at the pro level as compared with the recreational and club level. The power game probably requires that players "take the ball on the rise" much more often and more skillfully in order to come to net and present a credible volley game.

Further, the very rules of tennis -- which I think call for at least one baseline shot before any volley-- make the baseline game forever relevant and part of the game. And I certainly don't mean to depreciate or de-value the baseline game and "power baseline game" specifically, in any way. Nevertheless, I have always thought that the net game represents the ultimate attack in tennis.

The well-positioned net player, hopefully with the first or second volley, is essentially dominating the rally, forcing the action and making the baseliner "come up with the goods". The net game is surely a gambler's game to some extent. Yet well executed, it is a good gamble with the odds in your favor, most of the time.

I heard one player-coach comment that if he were going to lose a point, he would prefer to lose it "at the net going for my shot or volley" because at least you are in command of the point and your destiny.

I think that one thing that seems to limit a lot of players in the net game is their own self-definition. If someone describes themselves as a "baseliner", by default they limit development of their net game. Some people are simply afraid to come to net. Others would only venture to net if you offered them a nice, cold lemonade there! Chris Evert once joked that she would only come to net at the end of a match to shake hands with her opponent.

(Exceptions of course are Borg and Lendl who dominated their eras without much of a net game, though Lendl doggedly learned how to volley better later in his career.)

*The net game implicates other shots
Playing the net game means working on and executing other shots by implication -- for example, half-volley, dealing with lobs, overhead smash and most of all the transition game, meaning deep, penetrating approach shots to advance to net. Your net game is probably only as good as your transition game. In the modern era, Sampras probably had as good an approach as anyone, in particular impossible-to-deal-with first and second serves. In an earlier era, Jack Kramer executed a near-perfect transition game, hitting unreturnable, deep, penetrating approach shots.

*The net game requires concentrated practice and patience at net
I think that the net game adds variety to a player's game and helps keep the opponent off-balance and guessing. Is he or she coming to net this time or not? The net game intimidates some players. Many times at the recreational and club level, I have seen a player come to net and the mere act of coming to net forces an error out of the opponent. (In other words, there is never any volley to hit!).

Of course, if you are being destroyed at the baseline by a superior opponent, why not try come to net and try some volleys?

Yet I don't think one can get good at net without a lot of practice (as with most of tennis). The simplicity of the stroke is probably not a good substitute for regularity of habit. I think it was Aristotle who once wrote: "We are what we repeatedly do. Excellence, thus, is not an act but a habit."

*Playing doubles probably cannot help but assist your net game in singles
Example John McEnroe. He is widely considered one of the best doubles players ever with all his titles. It is probably no coincidence that he is also rated one of the best volleyers ever, with exceptional hands at net.

"There is no sensation in the sporting world so thoroughly enjoyable to me as that when I meet a tennis ball just right in the very middle of my racquet and smack it, just right, where my opponent should be but is not...that mad crazy thrill."

Match Play and the Spin of the Ball (1924)
Bill Tilden, Voted by AP Sportswriters of America in 1950 as "Greatest Player of Half-Century"
Posted by Gary Bala at 9:06 AM