Tennis Quote of the Day: Professionalism and Preparation 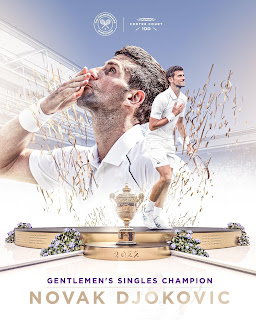 The players who approach the game with professionalism, preparation, precision, productive chores and thoroughness will always get their chances and rewards.

Why is Tennis Timeless? 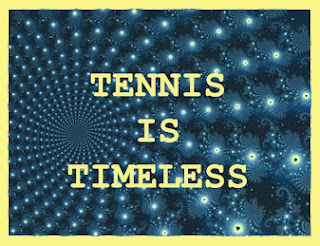 “Tennis is an amazing teaching tool. The game itself is great, but the life lessons it can impart are far more valuable: discipline, time management, problem-solving, critical thinking, independence, self-reliance, developing relationships with others.”

I started this Blog many years ago with a simple idea –
to help show that tennis is timeless, and that it reflects lessons for sports, business, school and life itself.

Shakespeare wrote the immortal words: “All the world’s a stage, and the men and women merely players.” And the same is true for tennis.

But even more, Agassi went on to remark: “Every match is a life in miniature . . . any hour can be our finest. Or our darkest. It’s our choice.”

As examples, let’s look at three (3) professional matches which reflect the sport as its best, and which exhibit its human drama and lessons. 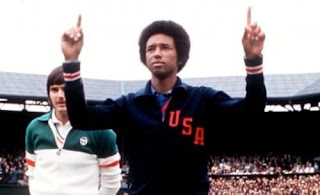 Few contests reach the legendary and epochal status in any sport as this match. Almost five decades later, many regard this match as the tennis equal of Muhammad Ali’s “Rope-a-Dope” triumph over World Champion George Foreman in their "Rumble-in-the-Jungle" in 1974.

Coming into the match, the heavily-favored and youthful Jimmy Connors was 22 years-old and in his prime. Connors was the defending Wimbledon Champion and World No. 1, and playing some of his best tennis. Arthur Ashe was the sentimental fan favorite but, at age 32, nearing the twilight of his distinguished career. And he had been soundly defeated by Connors a few months earlier in Johannesburg at the South Africa Championships. Most analysts rated Ashe’s prospects for victory quite low.

Ashe and his team developed a three part strategy to counter-act the power-hitting counterpunching game of Connors: 1. Slow the pace to the Connors forehand, with chip and dink shots, to offset his power game; 2. Hit balls shorter to bring Connors into the net where his game was weaker; 3. Lob often over the rushing Connors coming to net. The challenge was to stay focused and execute.

It worked magnificently. Ashe jumped out to a big lead in the first two sets, 6-1, 6-1. Connors fought back viciously in a tight and tense third set, 7-5. But in a close fourth set, Ashe re-doubled  his efforts at off-pace shots and lobs, and finally prevailed 6-4, and won the match.

Courageous execution of a thoughtful strategy paid off in a Wimbledon Championship title. Ashe became the first African-American man to win Wimbledon. 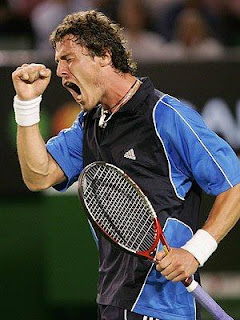 Timeless Lessons: Respect, not awe, for a superior opponent; Intentionality behind every shot; belief in your ultimate victory

17,000+ fans began assembling for the highly-anticipated semi-final match between two tennis giants at AO 2010. They and millions of world-wide viewers on television were to be treated to a blockbuster 4 ½ hour thriller - featuring world-class shot-making, dogged fighting spirit and suspenseful swings of momentum until the final point.

Marat Safin, former World Number 1 and 2000 U.S. Open Champion faced the seemingly invincible Roger Federer, World Number 1 and 4-time Grand Slam Champion on a 26 match winning streak. Safin lost a tight first set, and then fought back to win the second set and level the match. The pressure did not let up in tense third and fourth sets, with Federer raising his play level and taking the third set. Safin followed by finding new belief in his game and capturing the fourth set in a nailbiter tiebreak.

The fifth set was a battle royal which extended into overtime games. Every point was a titanic struggle as each player would punish any weak shot to end the point. Both players exchanged magnificent forehands and backhands. Safin found a way to elevate his game to its apex, and moved into the lead earning multiple match points. Federer, serving to stay in the match at 8-7 for Safin, showed cracks and fell behind. He valiantly fought off numerous match points but fell short. By breaking serve, Safin closed out the match at 9-7 in the fifth.

What can be learned? Safin’s play and methods illustrate lessons for us all. Despite Safin’s monster serve and powerful forehands, Federer took control early with an arsenal of shots, including baseline winners, drop shots and volleys. At times, Federer’s shot-making was beyond sublime and a thing of beauty to watch. But Safin remained unfazed. He held on and his power game eventually took hold. Commentator Patrick McEnroe observed that Safin’s attitude towards Federer was the right one: “respect” for each of his opponent’s shots, but not unbridled “awe” of the person himself, for that might intimidate you into a loss.

Each shot executed by Safin plainly had great intention and purpose behind it, regardless of whether he won or lost the point. Throughout the match, Safin in his mind never surrendered, despite coming from behind for most of the match against an apparently superior opponent with a better record. His belief in ultimate victory was on clear display – and was pivotal and decisive for his win. 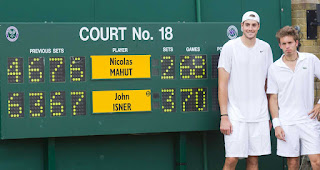 Timeless Lessons: The indomitable heights of the human spirit, and the limits of human endurance

Wimbledon 2010 began as it always does - with global excitement and anticipation. John Isner and Nicolas Mahut were assigned to Court 18 at the All England Club for their First Round match.  Little did they or anyone suspect that theirs would showcase a match for the ages. It became the longest match in tennis history, spanning 11 hours and 5 minutes, stretched out over 3 days.

Isner was the young big serving American power hitter, and Mahut the fierce French doubles champion specialist. They played a close match through four sets, trading sets to reach a final fifth set. But because of loss of natural light, play had to be suspended until the next day for what became their towering fifth set. Wimbledon at that time did not recognize a fifth set tiebreak. So the players were called on to simply play on  - until one player or the other won the fifth set by two games – and thus the match.

In the fifth set, each player held their serve – and kept holding it. The score reached 6 all, then 7 all, then 8 all. And then it went on and on and on, moving into the 20s, 30s, 40s, 50s and then 60s, with no end in seeming sight. The commentators, fans and worldwide viewers were stupefied. In fact, the electronic scoreboard itself stopped working at 47-47, and had to be re-programmed. And due to loss of natural light by evening, play had to be suspended and resumed the following day. All told, each player held serve an incredible 168 consecutive games and hit over 100 aces.

Neither player gave up or gave in. They reached their physical exhaustion point, and then went beyond. Finally, on the third day, Isner held serve in the 137th game of the set, at 69-68. Mahut valiantly fought to hold serve on his game but finally fell short. Isner broke serve at 70-68. And closed out the longest ever tennis match. Today, a plaque hangs at Court 18 to honor both players, their monumental effort and the history-making match.

What was shown on those 3 days on Court 18 by Isner and Mahut was far more than a tennis match or sporting contest. What was showcased was the indomitable heights of the human spirt, and the limits of human endurance.

These timeless matches have stood the test of time, more for what they taught us than the results.

They - and many others at all levels of play and over the years and across the generations - undeniably illustrate an enduring truth: Tennis is timeless! 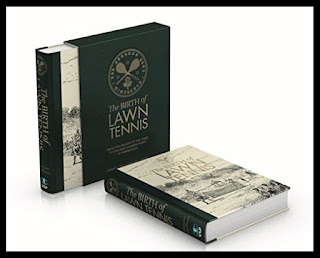 “The Birth of Lawn Tennis, From the Origins of the Game to the First Championship at Wimbledon”, by Robert A. Hillway & Richard T. Everitt (Vision Sports Publishing, UK 2018, 570+ Pages with Biographies, Charts and Timelines)(First Printing Run of 500 Leather-Bound Copies Sold Out).

After the late Bud Collins, Richard A. Hillway is considered one of our preeminent tennis historians, committed to the highest standards of primary source research.

Written with Co-Author and British tennis historian Richard T. Everitt, Hillway's book "The Birth of Lawn Tennis" is a massive and seminal tome on the origins of the game based on 20 years of research and study.

Lavishly illustrated with historical photographs and images, this masterwork takes the reader through the early history of what was then called 'lawn tennis" - first introduced and later popularized by Major Walter Clopton Wingfield in London in 1874.

Hillway's book reaffirms Wingfield's pioneering and pivotal role in the development of the game. And the book goes on to record events in the game's first years, leading up the maiden Wimbledon Championship in 1877, and tracks the players, officials and rules.

A unique contribution of the book is to help dispel persistent myths and false narratives which have sprung up about the game over time, some of which still appear to circulate today.

For example, it disproves false stories such as the one that lawn tennis originated in Birmingham, England in 1859 with Harry Gem and Augurio Perera. And the false story that lawn tennis was first brought to America in 1874 by Mary Outerbridge.

To better explain the book, Hillway has published an accompanying Research Booklet captioned "The Early Years of Lawn Tennis: A Guide for Historians and Researchers" (Click Here for the 28 Page PDF Version).

In "The Birth of Lawn Tennis", Hillway and Everitt have produced an exceptional piece of scholarly research for tennis history buffs, which also serves as a powerful tribute to a great game for the ages.
Posted by Gary Bala at 11:54 PM No comments: