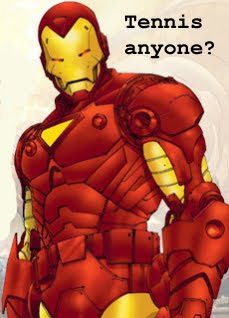 It went on and on and on, and then on some more...some thought it might never end...

In the longest professional tennis match in history, No. 23 seed John Isner (USA) defeated Nicolas Mahut (France) in the first round at Wimbledon in an unbelievable five (5) set marathon.

The match lasted 11 hours and 5 minutes, stretching out over 3 days. Each player hit over 100+ aces. It was an amazing display of physical fitness and mental strength by two tennis warriors, each pushing their own boundries of endurance and will.

At the conclusion of the match, both exhausted players hugged each other at the net in front of a wildly cheering crowd. With the world's media and tennis fans around the globe watching, the All-England Club honored each player and the Umpire Mohammed Lahyani with special awards for their history-making efforts and accomplishment. Some, including Andy Roddick on Twitter, said that such a match might never happen again.

As John McEnroe commented on BBC during the halt to play last night because of darkness, "This match was the greatest advertisement we've ever had for the sport... It showed how physically capable tennis players are. I think the respect level for the sport will go way up."

No substitutes, no team-mates, no coaching, no tie-break, and no real time outs...

No prisoners, no retreat and no surrender...

Simply a fight to the finish...

Lessons learned...
*Never Give Up
*Fitness is King
*The world's finest athletes in the loneliest of sports might indeed be Tennis Players

This tennis match was one for the ages - it showcased the resiliency and indefatigable nature of man's spirit...and the sportsmanship and honor of that grandest of games - tennis!

Britain is the modern home and origin of the sport we know and love, now called Tennis. Each year it hosts what many consider to be the sport's most prestigious tournament...the Championships at "The All England Lawn Tennis and Croquet Club", popularly called "Wimbledon."

But did you know that Wimbledon proudly offers visitors and fans one of the best tennis museums around - a museum which beautifully honors the rich traditions and history of the game?

In fact, it's a 21st century state of the art facility, showcasing never-before-seen exhibits and showpieces, with audio guides in 8 different languages. The Duke of Kent inaugurated the new museum on April 12, 2006. Some of the highlights include:

*A dynamic panoramic cinema on a 200 degree screen which envelopes the viewer into a Championship match. The film shows the science of tennis, and offers views on how players' bodies and equipment are affected during the course of a match.
*A John McEnroe hologram projection, where the multiple Grand Slam winner takes the viewer on an additional tour of parts of the museum and reflects on past matches and opponents.
*A fashion section where the "fashion whites" of Wimbledon over the years are on display, including Roger Federer's match clothing worn in the Championship Finals against Andy Roddick in Wimbledon 2009.
*Interactive "touchscreen" exhibits offering visitors, among other things, videos of past championship matches, and information on the evolution of tennis rackets and technology.

Be sure to check it out, if you ever one day attend the Wimbledon tournament... 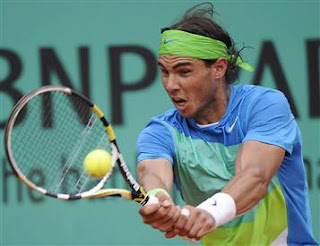 The King of Clay and the Princess of Paris
(Photo: Bertrand Guay/AFP/Getty Images)

Nadal rebounded from last year's injuries and setbacks by winning in straight sets over the player who, last year, handed him his sole loss ever at the Roland Garros. Nadal thus ended the 2010 clay court season with a perfect record, and won his 5th French Open title (joining the great Bjorn Borg who won 6 total).

Well done to all the champions and players of Roland Garros 2010!
Gary