Reprise: Tennis and the Art of Misdirection 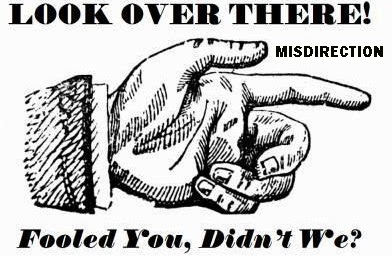 Have you ever heard of Harry Houdini? Well, he wasn't like today's magicians . . . He was an artist. The greatest of all-time. He could make an elephant disappear in the middle of a theater filled with people. And do you how he did that? Misdirection. What is misdirection? What the eyes see and the ears hear, the mind believes.
--"Gabriel", played by John Travolta, in the movie Swordfish (2001)

Think about the many weapons you might have in tennis -- speed, power, spin, strategy, fitness and even mental toughness.

Of all the weapons on the tennis court -- and for that matter, in life -- the one least often considered is: misdirection.

Indeed, misdirection may be the most devastating weapon of all.

What is misdirection? And how does it apply on a tennis court?

Misdirection is subtle and sophisticated. It's smooth and suave. It's brains over brawn. It's more about the mind than the body.

And it more then defeats the opponent -- it humbles him.

Misdirection is created when the opponent either:

1. expects one thing to happen and then sees another, or
2. has no clue as to what will happen and thus by definition suddenly sees what he does not anticipate.

Let's look at some of the ways misdirection might apply on a tennis court.

Misdirection in direction of serves: out-wide, into-the-body and down-the-T
Misdirection is also commonly created when, from an identical toss motion, the server can disguise his service direction. How often has Pete Sampras fooled his opponent with one of the best disguised serves in tennis history?

Misdirection with the Drop Shot
One of the most devastating examples of misdirection on the court is when a ferocious rally concludes with an unexpected drop shot (volley or groundstroke). One player simply raises his racket head above the level of the ball and angles it downward, producing a gently floating ball dropping into the court just over the net on the opponent's side.

Misdirection with the Disguised Offensive Lob
An experienced and savvy player with ball control can misdirect his opponent by appearing to prepare a standard passing shot, but then suddenly launching an offensive lob over his opponent's head.

How can a player help create misdirection?

One way might be to deliberately shape your opponent's expectation -- and then suddenly offer up something quite different than what was expected.

The best way to do that is simply to keep all your body's movements exactly the same until the very last second, thereby creating disguise.Then, by a quick angling of the shoulder, wrist and racket head, a very different shot is produced than expected.

Another way to produce misdirection is to deliberately offer up no clue as where and what type of shot you will hit. Then, any shot you hit will, by definition, be unanticipated. The classic way to do this is to keep your head down as long as possible through the shot. This minimizes any message about where and how your ball will be hit.

Another, less common, way to produce misdirection, is a simple head fake -- looking with your eyes (and thus positioning your head) in the opposite direction from where you are aiming.

What can help any player keep his head down or look the other way easier? Answer: Develop an intentionality to every shot, without regard to the position of your head or eyes.

Never hit a shot without first having a clear and powerful intention about the shot you are hitting - where you want it to go and with what spin and pace.

If you can create a belief in the opponent, by your movement and body language, that he will see one thing -- and then you suddenly execute the opposite or different action, you will begin to develop the subtle but devastating art of misdirection.

"The Masterpiece", a tennis poem by Rupert McCall

Tennis Quote of the Day: Respect Your Opponent and Yourself

"There is no shame in losing on a great point."