Wimbledon: What's the Excitement About? 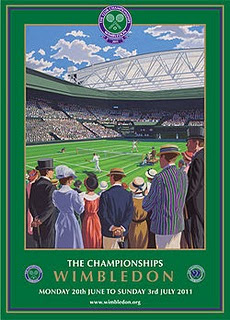 The 125th Wimbledon Championships are underway. Enjoy!Podcast Commentary on Wimbledon
By: Ron Miller of GottaPlayTennis.net
"Why the Grass Still Tickles the Toes"
Posted by Gary Bala at 9:38 AM 2 comments: 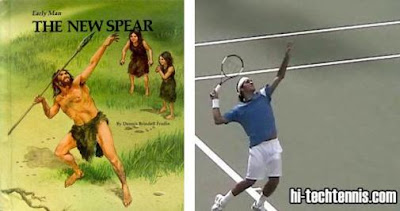 What do these guys have in common?

The answer of course is obvious: (E).

And it probably serves as a startling reminder of the importance and timelessness of excellence in technique.

Are you ready for the 125th Wimbledon Championships? 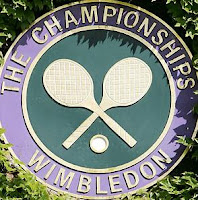 Here's a short video of the 2011 Pre-Wimbledon WTA Player Party.

Tennis and Time: How the Concept of Time is Pivotal to Tennis 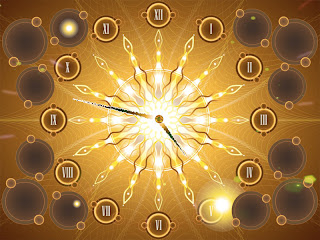 Time is a Fundamental Yet Elusive Concept in Our World
Time exists all around us, and apparently without end. We live our lives by it. For example, we constantly measure the passage of time with clocks and calendars. We sometimes use time wisely to get things done. But we sometimes waste it foolishly and regret its loss.

Time is often described as a "dimension", equal to the 3 common dimensions of space: vertical, horizontal and depth. Time is as familiar to us as our wristwatches. Yet we intuitively know that there is something mysterious about it.

Time also has a single direction - always from past to present to future, and never any other way. Theoretical Physicist Sean Carroll, in his recent book From Eternity to Here (Dutton, 2010), calls this the arrow of time. He explains that, while no known law in physics requires the past to be followed by the present and then the future, this structure is part of the cosmic blueprint in our Universe.

Time is also a relative concept as Einstein's Theory of Relativity teaches. It can speed up or slow down. Let's say that an astronaut in a spaceship is traveling at the speed of light. He would sense time for him moving normally. But he would see years of time elapse for his friends on Earth for every few minutes of his travel at light speed. Conversely, his suddenly-older friends would say that their astronaut friend traveled into the future as he would not appear to have aged.

Perhaps most important for us is that time is at least partially manageable. We can try and manage our time. We can organize and adapt our activities to time. We can do things faster or slower or differently to conform to time.

Let's talk tennis. How does all this relate?

How "Time" is Related to Tennis:
Controlling Time by Taking the Opponent's Time Away
Consider that, in tennis, there is no shot clock as in basketball. There also is no game clock as in soccer or football. You cannot sit on a lead and "run out the clock" on your opponent. In tennis, no matter how long it takes, you must win the last point and actively "close out the match."

Yet time is still a pivotal axis for success in tennis. How?

Monopolize time for yourself, and squeeze time on your opponent.

This applies both during points and even between points.

In playing points, Andre Agassi made a career in "taking the ball on the rise", and thus effectively robbing his opponent of time to properly strike the ball. Recall his exquisite timing in hitting the ball well before it rose to its apex, and thereby squeezing his opponent's options.

In between points, Rafael Nadal is probably the current master at controlling the tempo and rhythm of play. Observe how he deliberately slows down the pace of play and methodically towels off between point exchanges so as to impose his tempo on the match and his opponent.

Thus time, and how well a player can manage and utilize it to his advantage, can be crucial in a player's immediate and long-term success in tennis.

Ranking Tennis Players Based on:
"The Time Preparation Scale"
Top 20 Player
*Prepares and sets up a day early

Top 10 Player
*Prepares and sets up a week early

Top 5 Player
*Prepares and sets up a month early

Video: Taking Reflex Time Away from Your Opponent!
(Poaching in Doubles)
By: CleverTennis.com 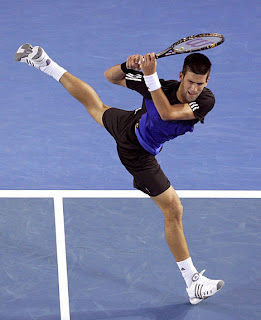 “Tennis players . . . we’re always playing in center courts that feel like arenas. And when we get on the court and the crowd cheers your name or salutes you—it’s like you’re a gladiator in the arena. And everyone is cheering—and you’re fighting, you’re screaming, during your strokes—it feels like you’re an animal, fighting for your life.”
- Novak Djokovic
From: Vogue Magazine (June 2011)
"Hot Shot: Novak Djokovic"
Posted by Gary Bala at 5:18 PM No comments: 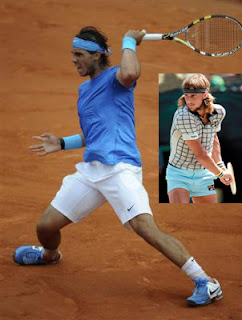 Paris, FranceRafael Nadal (Spain, No. 1 Seed) defeated Roger Federer (Switzerland, No. 3 Seed) 7-5, 7-6 (3), 5-7, 6-1, at Court Philippe Chatrier for his 6th French Open (Roland Garros) Title, tying him for the historic record with the great Bjorn Borg. It was his 10th Grand Slam championship title, and keeps him at World No. 1 rank."To win this final against one of the best players in the world and in history is something which is really fantastic for me," said Nadal. "It's one of my most beautiful dreams."Overcoming a slow start, Nadal methodically ground down his opponent with defensive shot-making gems, and heavy powerful topspin attacks. His trademark Reverse Forehand always produces devastating power and spin, inevitably generating winners or unforced errors against any opponent, especially on the clay court surface.Federer made a gallant effort especially early in the first set, and in taking the third set, but fell short again against Nadal at Roland Garros. "As it often happens, he is the best on clay," Federer said. "He proved it once again."Nadal joins only Borg, who won this title 6 times in the 1970s and early 1980s, in the record books as "Masters of the Red Terra Batu" in Paris.Congrats, Rafa!
Gary
Posted by Gary Bala at 4:16 PM No comments: 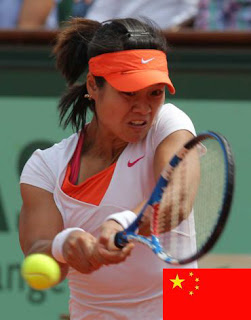 Paris - She brought her cool grittiness and colorful personality, with her power baseline game and obvious fitness. She showcased a scintillating serve, with deep penetrating groundstrokes from both forehand and backhand wings, which constantly drove her opponent back and off-balance.

She crushed 31 winners, and even threw in some unexpectedly spectacular volleys and lobs. And all this before a global tennis audience, including millions of households in her home country of 1.3 billion people where she is hugely popular.

Li Na (No. 6 Seed, Age 29) dubbed "China's No. 1 Sister" defeated current champion Italian Francesca Schiavone (No. 5 Seed, Age 30) in straight sets 6-4, 7-6 (0) at Court Philippe Chatrier. She made history by becoming the first tennis player from China (Chinese National) to win a Grand Slam championship title. Her victory lifted her ranking to No. 4 in the world.

It was a boost for both women's tennis, and for tennis in China - a nation which will probably be critical for future tennis growth.

"Today is a dream come true," exclaimed Li. Referring to her recent loss at the Australian Open final in January to Kim Clijsters, she explained: "I had no experience. I was very nervous. For my second time in a final, I had the experience. I knew how to do it. And I had more self-confidence."

China's pride was obvious. "Amazing," Li said. "I got a text message from my friend. They said they were crying in China because they saw the national flag."

Tennis is considered an elite sport in China. While the numbers of players are growing quickly, it still lags far behind basketball, soccer and other sports. But the hope is that Li's victory will help change things.

"I hope that lots of kids see my performance and in their hearts feel that one day they can do even better than me," she said.

Michael Chang, Chinese-American star who won this same tournament in 1989 as a 17 year-old, said: "[T]his could be the start of something very special for tennis in China . . . Li will definitely change the sport of tennis in China and that is a great thing."

Added WTA (Women's Tennis Association) President David Shoemaker: "There's going to be a good, steady stream of talented young players coming out of this region . . . I think it's really inspiring."