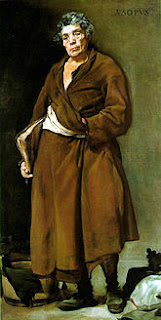 "Slow and steady wins the race."
Aesop's Fable The Hare and the Tortoise
(Greece, Circa 620 BC - 560 BC)Most experts say that, at nearly every level of tennis, the number of "unforced errors" will most usually decide a match.What is an unforced error? It's simply a shot that you are expected to make and have no obvious reason to miss. Indeed, these are the types of shots that most players who are practicing, are usually practicing on.If unforced errors usually decide a match, then who will probably win the match? The flashy and mercurial hare? Or the steady and patient tortoise?The winner will likely be the player who carefully recognizes and methodically manages his or her unforced errors. What are the best ways to manage unforced errors?Here's a quick list borrowed from some top coaches and writers on this topic.1. Watching the ball
In How to Play Better Tennis, Bill Tilden wrote: "At least 65 to 70 percent of all [unforced errors] are due to the player's not keeping his eye on the ball." When watching the ball, Tilden admonished: "I mean watch that ball from the time you first start to toss it to serve until the end of the point, and never look at anything else." (emphasis in original).Many coaches also make this simple suggestion to help a player watch the ball: literally look at the spin on the ball. Focusing on the ball's spin forces a player to really scrutinize the ball and its trajectory.2. World class racket preparation
There are very few things that we all can do as well as the pros. One exception might be racket preparation. It is said that we can all reach a level of world class racket preparation.The best players turn their shoulders and take their racket back on the way to the ball. This reduces the effort of the swing, and improves the timing to ball contact. And thus it lessens the possibilities for unforced errors.3. "It's about your feet"
At higher and higher levels, tennis is played, it is said, from the waist down - and in particular with the feet. It's all about your spacing to the ball before you swing - not too close to be jammed, and not too far to have to reach. Thus, it's about using good footwork to avoid errors.And as good players know, good footwork means the "split-step-and-go" just before the opponent's racket strikes the ball. And then it means many "baby steps" in moving towards the ball.4. Loose hands sink opponents
They say "loose lips sink ships." In tennis, the hands are key - and loose hands must surely sink opponents. Loose hands make for loose arms, shoulders, and torso. That in turn makes for a relaxed swing with maximum controlled racket head speed. Looseness equals relaxation, and relaxation encourages a calm focus which tends to limit errors. 5. Think "recovery" The best pros know that completely avoiding unforced errors is impossible. We will all inevitably make errors. The challenge then is to manage the errors, not eliminate them.Thus, coaches suggest that a player employ a particular "mind-set" to help manage errors. This is a mentality of rapid and fluid recovery from unforced errors, rather than trying to avoid unforced errors.Recovery means "letting go of the last point" immediately, and re-focusing on the most important point in the match - the next one - and how to win it. The player who can best do this over the course of a match will likely prevail.For a thoughtful discussion of unforced errors, please visit Ron Miller's GottaPlayTennis.net, and listen to Podcast # 67:
"Seeing the Errors of Your Ways."Best,
Gary
Posted by Gary Bala at 5:19 PM No comments:

The Rhythm of the Tennis Serve: 3 Styles 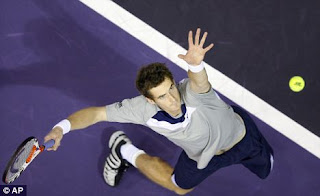 Here's a short video reviewing the 3 styles in the rhythm of the tennis serve:
1. Classic
2. Abbreviated
3. Staggered

Into which rhythm style does your serve fall?

Most experts suggest that the rhythm of the serve, regardless of style, is the single most important component of a consistent and effective serve . . . and the basis for control and power. 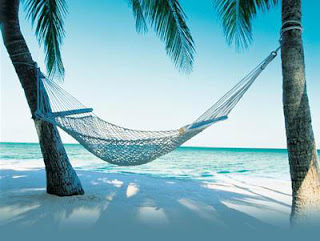 A player's rest and recovery always, and inescapably, follows his energy and activity.

In fact, this seems true in all endeavors in the human and animal worlds.

Indeed, this is the life cycle which underlies all existence.

In tennis and sports, top performance - and injury-free longevity - will likely depend on much more than practice and training.

It will depend, as the best professionals know, on intelligent and systematic recovery of body and mind between periods of activity.

Here's an interesting 28 page booklet from the USTA discussing recovery in tennis.

The Indian Express is No. 1 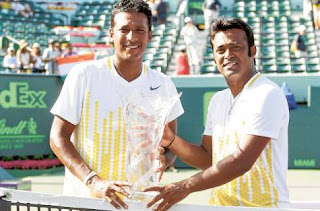 India's Leander Paes and Mahesh Bhupathi rose to No. 1 in the ATP World Tour mens doubles team rankings this week.

It was the Indian Express' second title of the year after the Chennai Open in January. And it came on the heels of India's historic cricket World Cup victory, the first in 28 years.

“The key (to us winning) was just fighting as a team. Like Leander said, we didn't play our best match of the week. All four of us were tentative in the beginning,” Bhupathi said.

Bhupathi and Paes found their rhythm in the second set and took the lead 3-1. And they pulled away after that.

“It's still early for us. The season is broken down into four segments — this is just the first of them. If we're still No. 1 after the U.S. Open, then we'll start getting excited,” said Bhupathi.

For now, well done!
Gary
Posted by Gary Bala at 1:02 AM No comments: 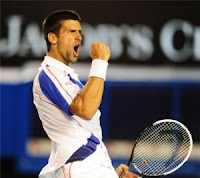 Miami-Key Biscane - It was one of the most thrilling championship matches in the tournament's history. It offered a sell-out crowd of 14,625 at Crandon Park a special tennis treat under a sunny 85 degree Sunday afternoon.

It was the first matchup between the No. 1 and No. 2 seeded players since 1995, when Andre Agassi defeated Pete Sampras. And it ended in a grueling third set tiebreak with both players playing at their highest level until the very last point, after almost 3 & 1/2 hours of tennis.

The Joker is the hottest player in tennis right now - and his game is anything but a joke. In fact, he now sports an undefeated record of 26-0 this year, the best start ever since Ivan Lendl's start of 25-0 in 1986.

And Sony Ericsson is Novak's fourth tournament championship in row this year, on the heels of his country Serbia's Davis Cup win late last year.

Indeed, The Joker's game now is about stratospheric levels of confidence.

Confidence is about that inner belief that, no matter what obstacles might be in your way, you will ultimately find a way to win. Winning matches, of course, breeds confidence - which in turn breeds more belief in winning . . .

Thus, confidence might be "The Joker" in everyone's deck of tennis cards. And as Novak has shown us, it is surely a worthy attribute to build and nurture.

Best,
Gary
Posted by Gary Bala at 9:20 PM No comments: