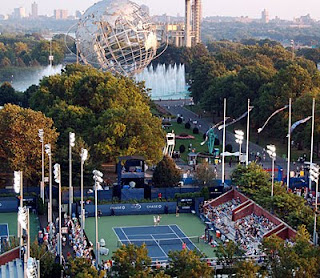 A group of my tennis club friends took the almost-3 hour ride on a mini-bus to see the US Open matches yesterday, Friday, Sept. 4, Day 5, which featured a full session of matches. We stayed through the day session, and part of the night session.

Wow, what an entertaining (an exhausting) day, packed with thrills.

We decided to break up into groups of 2 and circulate as we wandered through the matches and courts. We all caught different parts of different matches, a mix of second and third rounds.

I made an effort, with my buddy, to concentrate on the outer courts and the practice courts, to see what came up.

I first took in some of the Tsonga match win over Nieminen at Grandstand, and saw some of Murray's win at Arther Ashe stadium. (Last year, I saw Federer play a second round match at Ashe, but my seat was so high up that it was not conducive to a good view, in my opinion. Ashe is a monster-size stadium for only one court.)

We then hit the outer courts. We saw some of a doubles match with Nadia Petrova/Bethanie Mattek-Sands v. Virginie Razzano/Agnes Szavay. Then, another court to see some of Victor Troicki. We saw pretty Maria Kirilenko practicing on one of the empty outer courts before the start of a match. We then saw some of the Tomas Berdych match with Horacio Zeballos. We also some of Rajeev Ram teamed with up Melanie Oudin in their first round mixed doubles match. We saw some of Fernando Gonzales v. Josselin Ouanna.

The highlight of the day for me was hitting the practice courts to see these guys practice. Man, we were treated to star after star on various courts, some hitting on their off day, others warming up before their match.

The big moment came when the buzz at the practice court was that Federer was coming. There was a burst of applause when he entered from the back with his hat and tennis bag, people shouting "we love you Rog.". His father was following behind him. They walked over to Practice Court #1. His two hitting partners were running late.

Fed. and father were sitting in chairs waiting for about 5 minutes. But it seemed like an eternity to me. Fed. began jogging around the court, and came within 5 feet of me and my buddy. His hitting partners showed up for a vigorous hit session. It was the thrill of the day for me, in a day of thrills.

He moves like no other player I have ever seen, gliding on the court like floating on air, moving his core-body into each shot.

As if all this wasn't enough, we then see Jimmy Connors and John McEnroe come out on another practice court, just to hit for old-times sake, it seems. Wow.

Anyway, I could go on, but I'll stop. It was the tennis highlight of the year for me.

My take-aways for tennis playing nuts:
I spent a day with my eyes as big as half-dollars watching these guys play. What I noticed at this level of play, compared with players are lower levels -
*The incredible preparation (intentionality) each of them makes before each shot is uncorked (this seems like most of their effort)
*The fluidity of their movement and footwork on the court
*How cleanly and consistently they keep hitting the ball
*The length of their swings, especially their follow-throughs, on their strokes