Congrats to the Winners at Sony-Ericsson in Miami 2010! 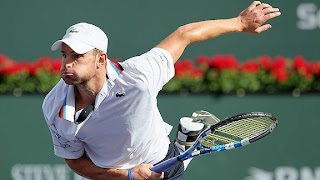 Men's Singles Championship
Andy Roddick wins over Thomas Berdych in two sets in the finals, 7-5, 6-4. It was a workman-like yet well-rounded performance by Roddick in a much-deserved victory after his recent loss in the finals at Indian Wells, CA. (Roddick will next play an exhibition against recently-retired Marat Safin at Caesar's Palace in Atlantic City, NJ next Saturday, April 10, 2010.) Well done!

Women's Singles Championship
Kim Cljisters wins over Venus Williams in two sets in the finals, 6-2, 6-1. In a quick dismantling of her opponent in less than an hour, Cljisters re-affirmed her position as one of the top power hitters in the women's game, and is enjoying her time as tennis mom as well. Well done, also!