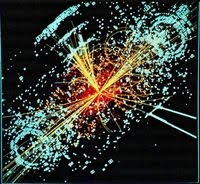 This post may seem a stretch, but stay with me just a moment...

On March 30, 2010, a significant development took place in the world of particle physics and potentially also theoretical physics.

This atom-smash event produced a ton of scientific data that the experts hope will answer basic questions about the universe and produce information that can offer practical advances also...I will allow the physics experts here to explain all this in more depth, if they care to.

Physics, arguably, is more responsible for many aspects of our modern world than almost anything else - iPods, smart phones, satellite technology, medical advances, you-name-it, etc.

In fact, it is said that the entire world, indeed the entire known and perhaps even unknown universe, may be simplified into a finite and perhaps brief physics (i.e. mathematical) equation...the so-called Grand Unified Theory (or Theory of Everything) which apparently unifies things such as the laws of "quantum mechanics" at the sub-atomic level, and "general" and "special relativity" at the macro-level.

This theory arguably also unites all the "forces" of nature and answers basic questions such as the existence of other dimensions, the so-called "God particle", dark matter, time travel, and faster-than-light travel, etc., not to mention cosmological questions about the end of the universe, i.e. the Big Crunch producing an "oscillating" universe, etc. Current "super-string" theory apparently is the early start of such as theory. It is said that Einstein was working on such a final theory before he died.

When a physicist sees a beautiful sunset or island beach landscape, he or she actually tries to see a mathematical equation which tries to unify and co-relate light, matter, distance, atoms, etc. Interesting?

Well, what does all this have to do with tennis?

Well, perhaps at some fundamental level, tennis is really a physics problem at the core - how to add spin and pace and depth or angle to a ball and keep it in play so as to produce a winning shot or error by the opponent.

A physics and geometry problem...

Is there a grand theory, or any physics or mathematical theory about winning tennis?