And the second shall be first... 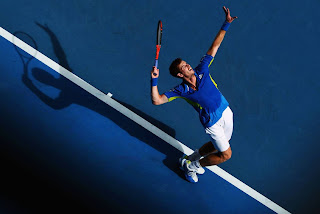 Some random thoughts on perhaps the most critical, and most difficult, shot in tennis...the second serve.

1. If the serve is considered the most important shot in tennis, the second serve is probably the more important of the 2 serves (i.e. first and second). If you miss the first, you get a second. But if you miss the second, you're done on the point. In short, you "gotta get it in".

4. In general, many coaches say that in serving, one learns first control and placement, then spin and then power last.

6. If second serve points won is a critical match statistic in many matches, then the quality of second serve becomes fundamental, I think.

7. The motto one hears on the serve priority is: "second is first, and first is second".

10. The old adage that we have all heard is: "You are only as good as your second serve."