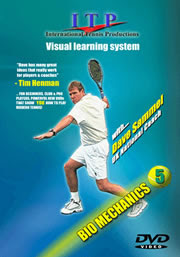 Biomechanics of Power, with David Sammel (ITP, 2001) 54 minutes with 19 Chapters and Bonus Feature.

International Tennis Products (ITP), based in the U.K., has produced this fascinating 54 minute DVD about the Biomechanics of Power in tennis, as part of their Visual Learning System series. Their website is:

Sammel breaks downs how biomechanics works in the major groundstrokes - forehand, backhand (both one-handed and two-handed), closed stance, and open stance. He includes many practices tips, drills and techniques to help the club and recreational player improve in this area. He also adds a bonus feature on developing a feel for groundstroke power and on maintaining dynamic balance on the run.

The core of Sammel's concept on biomechanics is: groundstroke power comes from the body's "big parts" rotating - especially shoulders, hips, and "core". He explains the so-called kinetic chain movement with power coming from the ground-up traveling from feet to bent knee to hips to shoulders in the takeback (i.e. "loading" or "coiling"). This is followed by movement traveling from shoulders to hips to arm to hand with racket head "sweet spot" following-through to full finish (i.e. "unloading" or "uncoiling".)

In my view, the biomechanics of efficient and powerful tennis has probably not been a well-understood concept by many club and recreational level players. Indeed, many coaches say that they see too many lower level players hitting the ball with too much "arm" and "hand" only. In contrast, we see the top players, though they may vary in play style and other aspects, efficiently and intelligently use their body mechanics to maximize their game.

This fascinating DVD helps to de-mystify this sometimes little-understood area of biomechanics for everyday players. And it offers illuminating insights into how recreational players can improve their use of biomechanics in their play, and thus elevate their game. Well done.