Book Review: "The Education of a Tennis Player", by Rod Laver with Bud Collins 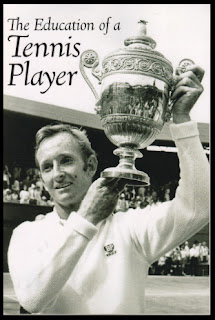 The Education of a Tennis Player, by Rod Laver with Bud Collins (Simon and Schuster, 1971)(318 Pages, 25 Chapters, with Introduction, Epilogue, 3 Appendices, Index and Black and White Photos), republished in Paperback by New Chapter Press, April 2010, with updates and 4 new chapters (280 Pages).

On the 40th anniversary of his 1969 Calendar-Year Grand Slam victory, Rod Laver's classic historical memoir The Education of a Tennis Player, was selected last year by New Chapter Press for an updated printing and made available this month, April 2010. And we are indeed fortunate that it's now out. The original publication was widely-praised after it's first release, with a review on Amazon.com calling it "probably the greatest tennis book ever to be written."

Complete with updates and 4 new chapters covering Laver's near-fatal stroke and recovery in 1998, his helping Australia win the Davis Cup in 1973, and his 1975 exhibition against Jimmy Connors, the reprinted book re-introduces Laver's famous memoir to old and new readers alike. It's his electrifying story of the last Calendar-Year Grand Slam in 1969 at age 31, arguably the sports' single greatest achievement, with reflections on his childhood, youthful playing days and other important players and matches.

Laver himself was quoted: "I am delighted that The Education of a Tennis Player is back in circulation and available for a new generation of tennis fans. Winning the Grand Slam for a second time in 1969 seems just like yesterday and this book brings back a lot of memories of the great matches and exciting times."

Laver's career record is widely known, earning him the unofficial name "The Rocket". Laver's climb from the farm boy from Queensland whom Coach Harry Hopman called "scrawny and slow" to tennis immortality was powered by a unrelenting all-court game which simply eviscerated opponents. He won 11 major Grand Slam singles titles, behind only Roger Federer, Pete Sampras and Roy Emerson. He is the only player in history to win two Calendar-Year Grand Slams, all four majors of the year, in 1962 and 1969. He won nearly 200 singles titles in all, and was inducted into the International Tennis Hall of Fame in 1981.

Laver was assisted with the book by International Tennis Hall of Fame journalist, historian and colorful commentator Bud Collins. Collins was quoted about Laver and the book: "Rod Laver is one of the greatest treasures we have in tennis and The Education of a Tennis Player is one of our sports most important literary works. Rod was always so humble and gracious, but he could play tennis like a hurricane. He was as great a champion as we have ever had in tennis and one of the all-time nicest guys...My champion of champions is Rod Laver."

The book takes the reader on a tennis journey through Laver's eyes of perhaps the single greatest season any player has had - 1969. Laver's descriptions, with Collins' help, of the matches, conditions, weather, player strengths and weaknesses, and court atmosphere brings them to life. Laver's first baby was due on the same day as what became his 1969 U.S. Open final win against fellow Australian Tony Roche, adding to the excitement. Meanwhile, Laver's French Open and Wimbledon final wins that year, also against two fellow Aussies, Ken Rosewall and John Newcombe respectively, are described almost stroke for stroke, thus invoking the reader's tennis imagination to be on court with them almost literally.

For me, one of the most impressive aspects of the book was the insightful comments about other top players and personalities.

Laver on Arthur Ashe:
"The impact of Arthur Ashe on tennis is incredible. Probably the best thing that happened to the game in 1968 is that I didn't win the U.S. Open in Forest Hills and he did...He had the right combination to make the world, especially America, notice: he was black, he was an American, he was exciting - a big hitter - he was articulate and he knew his way around. He was new and different, and tennis needed that...Arthur was at once an athletic-political figure, a champion considered a spokesman for blacks...It was, and is, an awesome role. Sometimes, Arthur seems to act as though the world is on his shoulders. But the fact is that pressures on him from all sides must be terrific. I can't imagine how I would be able to walk in his shoes."

Laver on Pancho Gonzales:
"It's always been Pancho grabbing the headlines as long as I've been a pro, and I suppose it always will be Pancho. He shows no signs of giving out, even though he periodically "retires"...It absolutely killed him to lose. He fought you for everything, intimidated everybody in the place...Pancho has the air that says he's champion...If anything, he's more regal today. When we're playing each other, the contrast is almost comical. Me with my bowlegs and 49,000 freckles, a little guy chasing about. Him with his dark, forbidding face, crowned by the black hair tinged with gray, tall, graceful, gliding...Gonzales is the master gamesman, a badgerer and moaner."

If all this is not enough, Laver and Collins address players at all levels at the end of each Chapter by offering 25 instructional "lessons" on strokes, technique, mental preparation and so on (with photo examples in the original version). Want to learn about the forehand, serve and "crisp volley" from one of the game's Masters? Or about confidence, handling injuries, the "killer instinct", or just hitting through the ball? It's all here, and in simple and focused language.

And throughout the book, Laver's simple grace and good-nature comes shining through.

In summary, The Education of a Tennis Player is a timeless classic offering powerful insights for a whole new generation of tennis fans and players. It's a vivid historical look at players, matches and the game in an earlier era. It's the compelling story of the last epic Calendar-Year Grand Slam. And it even adds lessons about strokes, technique, and the mental game still relevant today- all from one of the game's greatest players ever. One could not ask for more! 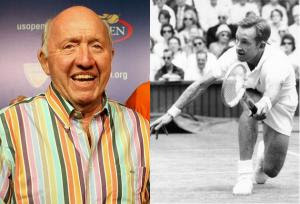