Caesars Tennis Classic is a hit for tennis, fans and Atlantic City! 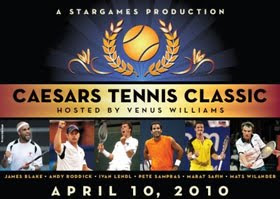 Despite the fact that one of the stars James Blake had to withdraw before the event due to a knee injury, the evening was a fun and memorable one for all with some exciting tennis from 3 generations of champions for 3 generations of fans...

My takes on the night: Lendl played better than his score, he moved well, looked slimmer and his chronic bad back did not seem to hinder him. His serve and power baseline game (and even some volleying) could be seen, yet he needed to improve his consistency and timing. Wilander simply showed more consistency and less errors.

Safin looked strong with some solid serves and passing shots. Sampras continues to serve at a very high level, but perhaps is just a little slower in court movement. Roddick, just coming off his win at Sony Ericsson-Miami, seemed to really enjoy himself, having fun on the court and knocking off some real power serves and showing his "new" game play of variety, including slice backhands and drop shots.

All in all, the exhibition matches gave the players a chance to enjoy some competition in a relaxed setting and gave 3 generations of fans some fun and interesting tennis.

Caesars announced that the event will return in 2011 and Sampras said he would like to play again...

For more information and photos, check out:
Press of Atlantic City: Caesars Tennis Classic a smash