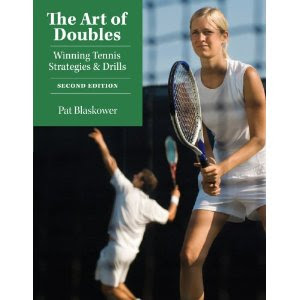 Pat Blaskower is a former national Number One player in Women's 35 Doubles, who went on to coach intermediate and advanced players for over 30 years in California and Connecticut. Her league doubles teams consistently reached the Districts, Sectionals and Nationals.

The book's Chapters discuss each of these topics with detail and insight, and many others as well such as: creating a balanced doubles team, flexibility, keys to winning and common reasons teams lose, and a variety of doubles drills to improve court skills. Each Chapter concludes with a brief checklist covering the highlights of the Chapter, which is very helpful.

She makes a point to argue against, according to her, the most common "misconceptions" in doubles play including, among others: The player with the forehand always takes the center ball, the server takes the lob over the partner's head while this partner crosses over but stays at net, I never poach at net because I will get in the way, I never come to net on second serve, there is no point to serve-and-volley because they will just lob you, and others.

Blaskower is a strong proponent of the 80%-20% rule, namely that a good doubles team can properly position themselves to cover 80% of the court and win the point most all the time. She also argues that teams should take the ball out of the air as often as possible to maintain net position as much as possible.

In her one hour CD Interview with Brent Abel of WebTennis.net, "Top Ten Doubles Questions and Answers", Blaskower reviews what she believes are the most commonly asked questions by players at all levels about the doubles game. Her answers are crisp and pointed.

For example, regarding where to serve, Blaskower points out that serving to the opponent's backhand side is not always appropriate given that the true purpose of the doubles team to set up the net partner for the winning volley. To accomplish this may, for righties on the deuce side, sometimes call for serving wide to the opponent's forehand side, not backhand.

Similarly, regarding the "transition game" which involves moving forward to net after service or a service return, Blaskower points out that learning to play that "no-man's land" on the way in is a critical part of controlling the net. She suggests a drill she calls "shadow doubles" to help learn "no-man's land" skills, which involves doubles partners hitting to each other from each's "no-man's land".

Both the book and CD are packed with numerous insights and concepts informed by Blaskower's many years of successful coaching. Intermediate and advanced players will certainly find many points instructive and useful as they build and refine their doubles play.