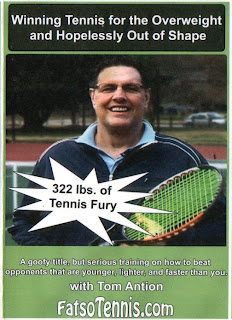 Winning Tennis for the Overweight and Hopelessly Out of Shape (DVD, 2010)(15 Chapters, 2 Discs, Apx. 3+ Hours, produced by Antion & Associates) available at FatsoTennis.com

A man's got to know his limitations. Clint Eastwood playing Lt. Harry Callahan in Magnum Force (1973)

Tom Antion, former college player for West Virginia University, successful Internet marketer, and avid tennis player and fan takes a light-hearted yet interesting approach in this new DVD to winning tennis for the not-so-fit recreational and club player. In short, Antion is speaking to people who are just plain large and heavy, and know their limitations. In fact, Antion jokes that he himself, at 322 pounds, is probably "the largest person ever to produce and star in a tennis how-to video."

It runs over 3 hours, broken down into 15 chapters on 2 discs. Antion thoroughly covers equipment issues, what to take in your tennis bag, hydration and heat control concerns, warm up and practice drills, on-court tactics, and what he calls "killer patterns" - all specially geared for players who are not so fast or light on their feet. Each DVD chapter ends with a short checklist summary of the information reviewed which, of course, is helpful.

Many of the ideas and concepts presented by Antion in this amusing DVD may not be "new" to the experienced player. But they are offered in a comprehensive and often-humorous way, all with a common theme which is: Make the other guy run and "suck air", while you conserve as much energy as possible.

Other examples are: 1. simply improving your slice serve to both the deuce and ad courts so as to pull the opponent out wide to an out-of-court position; 2. hitting approach shots always "down-the-line" to minimize your recovery steps back into the court for the next shot; and 3. developing an open-stance forehand on shots hit wide to you, again so as to minimize your recovery steps to the next shot.

As to conserving energy, Antion encourages a player who is losing or who needs to catch his breath to slow down the pace of play, within the rules of course. A few examples are extra ball bounces, extra ball serve tosses, and generally pick ups of any stray balls, if they truly pose a falling hazard.

All in all, the DVD was an interesting and entertaining exercise, and offered some advantageous information and tips which can certainly be put to use to by all players to pick up an edge.

Antion's example of a powerful lob tactic - the Sun Lob
Posted by Gary Bala at 12:40 PM