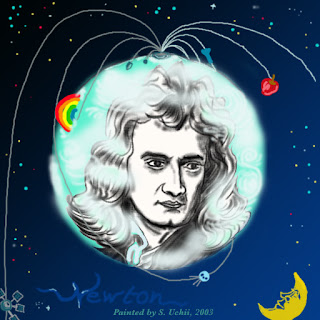 Law I: Every body persists in its state of being at rest or of moving uniformly straight forward, except insofar as it is compelled to change its state by force impressed.

Often called the Law of Inertia, Sir Isaac Newton's First Law of Motion was presented in 1686 in his thesis: "Principia Mathematica Philosophiae Naturalis".

The First Law of Motion simply means this:

How does this apply to tennis players?

*If your feet are still and you are standing on your heels, you are an "object at rest", tending to stay at rest.

*Dr. Jack Groppel, a leader in biomechanics and sport science, once wrote that when a tennis player's heels are flat on the court, "The force between your shoes and the court is equal to your body weight."

*Example: Let's say that you weigh 175 pounds. Then, it is as if there is a weight of 175 pounds on top of your head that must be moved off before you can approach the ball to hit it.

*The solution in tennis to this problem is what teaching pros call: the split-step. Or more correctly, the "split-step and react." Some people call it "hop-and-go."

*The split-step is a simple hop up off the court, with bent knees, just before the ball makes contact with the opponent's racket. Thus, at the precise moment when the opponent makes ball contact, your body is in the air - an "object in motion", tending to stay in motion. And, as it comes down, your body is already reacting and moving to the ball.

*The timing of the split-step is vital - split-stepping too soon or too late renders the player's game ineffective.

*Ideally, the split-step is done before every type of shot hit by the opponent: groundstroke, volley, serve, return, anything.

*The most important part of the split-step is not the split-step itself, but the "react" part just after the split-step. This reaction is a explosive first step towards the ball, with the shoulder turned or snapped in the appropriate direction to respond with forehand or backhand.

*The continuous "split-step" for every oncoming shot is a hallmark of the advanced player.