DVD Review: "Building the Serve from the Ground Up", by Jim McLennan 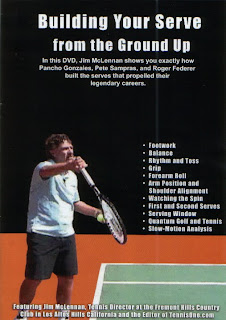 Building the Serve from the Ground Up, by Jim McLennan, (DVD, One Disc, 70 minutes, 15 Chapters)(Essential Tennis Instruction, 2010)

In this very interesting DVD, he presents his multi-year project on the tennis serve. It shows, step-by-step, how a player can build a winning serve from "the ground up".

McLennan's multi-year project focused on breaking down the serve into its essential components. The project did this by studying photos and videos of the legendary serves of all-time greats, including Pancho Gonzales, Pete Sampras, Roger Federer, and Lew Hoad. McLennan himself was once coached by Tom Stowe, who was the coach of the legendary Don Budge.

McLennan describes what he calls the five (5) master keys to the serve: balance, rhythm, effortless effort, spin (to bring the ball into the court), and snapping or whipping the racket (not wrist) through the serve.

In 15 DVD Chapters, he outlines exercises to help the player build these 5 components into their serve. McLennan explains that the last serve component, the snapping or whipping of the racket, is the most difficult part for the causal observer to see. He describes the motion of this crucial component as: "throwing a dart into the sky, and then unscrewing the light bulb".

In the final DVD Chapter, Jon Wong, a former nationally-ranked Stanford University player, demonstrates the execution of the McLennan serve.

Along the way, McLennan touches on other fascinating topics such as the "third serve" (a reliable serve in-between the first and second serves) and the "serving window" (the zone above the net within which a server must serve for the ball to drop into the service box).

In summary, Building the Serve from the Ground Up (DVD) offers a fascinating and practical guide to help master the most important and probably most difficult stroke in the game - the serve - based on a careful study of the top servers in tennis.