Congratulations to the Singles Winners at 2010 Wimbledon! 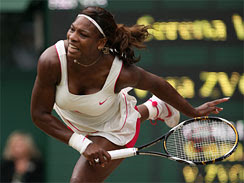 Her big serve was dominant. Serena won 31 of 33 points on her first serves. She hit her fastest serve - 122 mph - for an ace in the final game. She finished the tournament with a record 89 aces.

Serena is clearly the defining woman player of this 21st century...

Together with her sister, Serena and Venus have defined the power baseline and big-serve game on the women's side...

Here's what Patrick McEnroe said about Serena in his recent book Hardcourt Confidential:

"[S]he must have the best woman's serve, ever. She has the same service motion as a man, and she can hit the kicker as her second serve ... The game will belong to the woman who figures out how to serve big - and backs it up with a combination of power and spin from the baseline. Serena has shown us what the future might be like, while dominating the present." (Pages 55-56)

RAFA
No. 1 ranked Rafael Nadal (Spain) defeated No. 12 seed Tomas Berdych (Czech Republic) in straight sets, 6-3, 7-5, 6-4 in the men's singles final on Sunday. Rafa won his 2nd Wimbledon title and 8th overall Grand Slam singles title. This was also his second back-to-back French Open (Roland Garros) title and Wimbledon title. Only Roger Federer and Bjorn Borg have managed the feat of these back-to-back titles in the past.

Overcoming tendonitis in both knees hobbling him last year, Rafa finished the match in 2 hours and 13 minutes, breaking serve 4 times and holding all his service games. With this win, Rafa extended his record to 5-0 in his last 5 major finals, and solidified his hold on World No. 1 rank.

At 8 Grand Slam singles titles, Rafa's game - after Roger Federer's - has set the standard for spin and power for players in the 21st century on the men's side...

Has Rafa finally established that he is much more than a clay-court specialist?

“If you really want to play well on one surface and you are a good player, I think in the end you are going to find a way,” Nadal said.

Patrick McEnroe in his recent book, Hardcourt Confidential, agrees: "Nadal used to be lousy on grass...But Nadal is a genius - an exceptional athlete who was able to transcend his developmental history...Great players find a way to win on all surfaces...It's the talent!" (Page 86)

Well done to Serena and Rafa, and to all the players, personnel and officials at the All-England Club at Wimbledon 2010!