An evening with the Philadelphia Freedoms 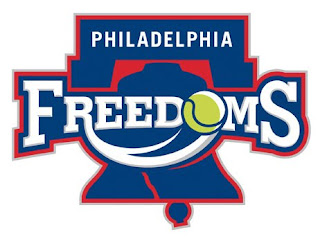 I attended a fun evening with the Philadelphia Freedoms of World Team Tennis (WTT) on Tuesday, July 20, 2010 at the Villanova Pavilion in the Philly suburbs.

The St. Louis Aces, and star Anna Kournikova, were in town to take on the Freedoms, led by Prakash Armitraj, the son of the 1970's Indian tennis legend Vijay Armitraj.

World Team Tennis (WTT) is the brainchild of tennis great Billie Jean King, who played for the Freedoms herself in the 1970s. (Many people probably recall Elton John's famous hit song "Philadelphia Freedoms", which he wrote for Billie Jean.)

WTT has been around for 35 years. It's a fan-friendly atmosphere, with music on loudspeakers between points, t-shirt and tennis ball give-aways, autographs for kids, and lots of fan-cheering for players and teams. It's a co-ed team format with 10 teams representing various U.S. cities, playing a match season over the month of July.

The matches are fast-paced - "no-ad" scoring, games to 4 points, 5 games to a set, with cumulative team scoring. WTT uses a 13-point super-tiebreaker, if teams are tied at end of 5 sets.

Many top current and retired stars (and stars returning from injury or lay-offs) have used the WTT platform to showcase their game. Among them are: Andy Roddick, Venus and Serena Williams, Martina Hingis, Kim Clijsters, Pete Sampras, Andre Agassi, and John McEnroe.

It was great to see some 7.0 level tennis, and some awesome hitting with power and topspin. These players showcase how top players make massive efforts to prepare for the ball before unleashing their strokes. And their use of "rotational power" and full finish "follow-throughs" on their strokes was impressive, to say the least.

For more information, click here: The Philadelphia Freedoms
Posted by Gary Bala at 11:05 AM