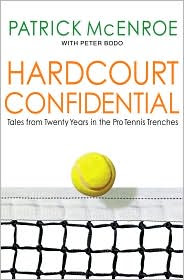 With this newly-released book, the U.S. Davis Cup Captain and ESPN Commentator Patrick McEnroe, brother of the great John McEnroe, offers up a fascinating read into the world of pro tennis and some of its top stars. For me, PMac has always been a thoughtful and articulate commentator on the game.

And his book did not disappoint. Indeed, I found the tales told by PMac in the book to be quite fascinating. Even more useful for me were his insightful comments about the growth and development of modern tennis - all from PMac's unique perspective as commentator, coach, player and insider for 20+ years.

The book is organized by mirroring the tennis year calendar, with tales spanning from: January's Australian Open to the Fall's U.S. Open and the year-end Master's tournaments.

PMac's stories of the big stars are set against the backdrop of the world of pro tennis. It's a small and insular world. And it's not surprising that it includes many driven egos, fragile personalities, and some real-world Prima Donas. And PMac does not pull his punches...

Among those covered in the book: Brother John McEnroe (who is a recurring subject), Pete Sampras, Andre Agassi, Andy Roddick, James Blake, Serena Williams, Roger Federer, Rafael Nadal, Coach Robert Lansdorp, even TV commentators such as Cliff Drysdale and the list goes on.

What I found most illuminating however was PMac's comments about the game of tennis:

*"Tennis is a game steeped in aesthetics and etiquette. Nothing, including frantic attempts to expand the basic audience or the sometimes shocking behavior of the players, has done a lot to change that...gorgeous tennis, sportsmanship and personal appeal has never gone out of style...One reason tennis attracts so many female fans is because you can watch the game and focus on individual performance, rather than the combat or score. Tennis can be balletic or bullish..." (pp. 142-143)

*"Tennis has largely been a middle-class aspirational sport...the game is full of niceties that no one really wants to give up - raising your hand in apology when you inadvertently hit a let-cord winner...[or when you] hold up new balls before serving..." (p. 143)

*"Tennis strives to be a popular sport while retaining many elements that make it elitist in the same way that the Marine Corps or a good school...is elitist. The game is focused on being inclusive, but it's exclusive in that it asks you to embrace tennis traditions." (p. 143)

*"Power has always been the Holy Grail in tennis, and maybe it always will be, even though power alone no longer suffices to get the work of greatness done." (p. 146)

*"[A] combination of court speed and the advent of polyester strings (sometimes in combination with traditional gut) now allows men to take savage cuts at the ball and still have it fall in. And it has led to an absolute mastery of spin." (p. 53)

*"Racket speed (how quickly you accelerate through the stroke) today [is] the grail...The search for increased racket-head speed has led many pros to play with ever lighter frames. The advent of polyester strings also had a huge impact in recent years. The old truism dictating that the harder you swing, the less control you have, has been turned upside down. With the new less elastic strings, swinging from the heels gives you more control." (pp. 98-99)

*"A player's first job under duress is to avoid the silly and stupid error. His second task is to make something happen, preferably forcing an error." (p. 55)

*"[T]he one shared attribute of all great players is exceptional timing." (p. 99)

*"[G]etting good [in tennis now] is less about stroking technique...than how well you hit on the move, how fit you are, how well you play defense, or transition to - and from - offense...you'd better be ready to rip the ball, open up the court, and seize your chances. And do all of that on the fly." (p. 98)

All in all, with Peter Bodo's wonderful assistance, the book is well-written and engaging. And it makes for some interesting summer reading into the game of pro tennis today.