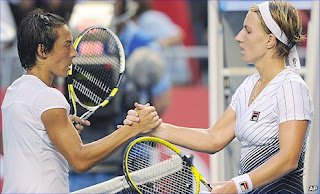 Melbourne - It was "Ms. Pocket Hercules" vs. "Comet Kuz". It was the irrepressible Italian force vs. the supremely dangerous Russian shotmaker. And it was the longest women's match in Grand Slam tennis history and in the 43-year Open Era. . .

Total match time: 4 hours and 44 minutes. Total effort expended: all there was. Match summary: An ultimate test of character. Final result: An epic match for the ages. . .

"To live the moment was the most important for me," said 30 year-old Schiavone, the 2010 Roland Garros-French Open Champion.

"We both fought so hard the whole match," said Kutznetsova, the two-time Grand Slam Champion (2004 US Open, and 2009 Roland Garros-French Open).

The third set alone lasted 30 games and 3 hours, with each player responding tirelessly and courageously to the other's relentless shot-making.

ESPN's commentator Pam Shriver remarked that the more tired both players appeared to get, the more they seemed to play at a higher level!

Carrado Barazzutti, Captain of Italy's Fed Cup team, who witnessed the entire match and saw both exhausted players hug each other afterwards, commented: "It was one of the best women's matches I've seen in term of emotions."

And it was also one for the tennis history books. . .

Well done to both players!
Gary
Posted by Gary Bala at 9:34 PM