Who was the last Aussie and "janitor" to win the Australian Open? 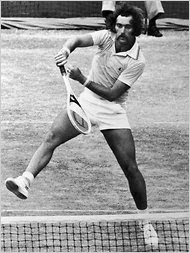 Mark "Superman" Edmondson
The media called him "janitor" because he had taken odd jobs cleaning windows to help pay for tennis expenses. The fans called him "Superman" for his heroics and rise from humble origins.

He was ranked No. 212 at the time. And 35 years later, he is still the lowest-ranked winner of a Grand Slam since the ATP started ranking players in 1973 - underscoring his Herculean effort against all odds.

Edmondson won 6 career singles titles and 34 doubles titles, including 5 major titles. He was inducted into the Australian Tennis Hall of Fame, and has been honored with a bust of him at Melbourne Park, current site of the Australian Open.

Many say Edmondson and his generation represented the "last gasp" of Australian tennis' golden era.

That remains to be seen as a new generation of promising Australian players continue to make their efforts to rise.

Meanwhile, for now, Edmondson's accomplishment continues to stand tall in the annals of tennis history.