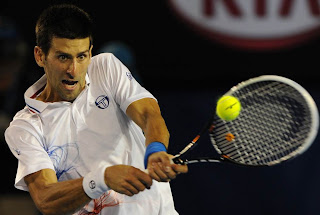 The Associated Press called it: "one of the most dramatic finals in tennis history."

A sell-out crowd at the Rod Laver Arena in hot and humid conditions, and a worldwide television audience, would agree that it was an epic battle for the ages.

Djokovic has won 4 of the last 5 Grand Slam titles, the last 3 in a row, and the last 7 finals he played against Nadal, 25. He retains his World No. 1 rank.

It was the longest Australian Open final in history, and the longest Grand Slam final ever.

In the words of ESPN commentator Chris Fowler, the players "re-defined the boundary of what's possible on a tennis court."

If tennis, on a primal level, is about physicality, endurance and the mental battle, this match raised the bar of what 2 players, each refusing to buckle, can do.

"We made history tonight, and unfortunately there couldn't be two winners," remarked Novak.

"I will never forget this match," said Rafa. " Even though I lost, it was something really special for me."

What is next for tennis this year after such a fantastic start at Melbourne Park over the fortnight?

2012 promises to be one of tennis's best years.

Congrats to all the winners, players, fans and supporters at the Australian Open 2012!
Gary