Peace through Tennis: The Indo-Pak Express 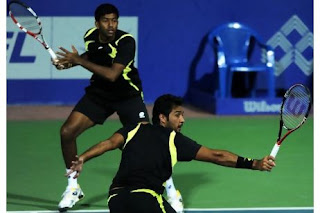 In today's political world of turmoil and trouble, Rohan Bopanna (India) and Aisam-ul-Qureshi (Pakistan) are helping to spread a message of peace through tennis.

India and Pakistan are nuclear powers in the Indian sub-continent. And they have often been bitter adversaries and foes in global geopolitics.

But that did not stop Indian Bopanna and Pakistani Qureshi, friends for 14 years, from joining forces in 2007 to play doubles.

By 2010, the rising duo sported some major credentials: the U.S. Open Final, Wimbledon Quarterfinals, 5 ATP tour finals and the Johannesburg Open Championship. They recently ranked as high as in the top 10 of doubles teams in the world.

And they have become known as the "Indo-Pak Express", offering an example of how sport and tennis can help build bridges.

On their tennis rise, Bopanna commented: "We just have to keep learning from every game going forward. That's the only thing. We just have to learn from our mistakes, keep trying and keep improving for the tournaments ahead."

Qureshi added: "It has been a good thing for the last two years. if you see our rankings, it has been improving every month, every week. So, it feels really good. Doing well with a really, really good friend on the Tour is like the icing on the cake."

As for any political message sent by the pair, Bopanna humbly insists that tennis is, of course, their main focus. He explained: "It's just two friends trying to help each other in their respective careers. He doesn't have anybody from Pakistan to play with."

Of course, most observers know that there is something special going on here also - wherever the Indo-Pak Express play tennis.

“It’s the same thing about tennis. We are trying our best to send the same message of peace through our game, whatever we can do in the best way possible. If both of us, from different nations, different cultures and religions, can get along well, others can, too."