Tennis and the Power of Now 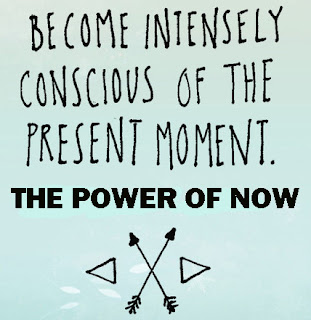 The best way to live in life is in the moment.
--Eric Spoelstra, Miami Heat Coach on June 18, 2013, Post-Game Press Conference after Miami's stunning last minute victory in Game 6 of the NBA Finals against the San Antonio Spurs

We are now faced with the fact that tomorrow is today. We are confronted with the fierce urgency of now.
--Rev. Dr. Martin Luther King, Jr., April 1967
"Beyond Vietnam: A Time to Break Silence"

Nothing exists except in this present moment.
--Eckhart Tolle, The Power of Now (1999)
What is the "Power of Now"?

Tomorrow is just a hope in our mind. The past is just a memory in our brain.

Indeed at the highest levels of theoretical physics, it is the view that time itself is an illusion.

This view says that the past, the present and the future do not actually exist.

As Einstein once remarked: "The distinction between the past, present and future is only a stubbornly persistent illusion."

There is only the "Now." And everything that is, is only a "succession of nows."

Physics and the Power of Now
Does physics help us understand all this?

British physicist Julian Barbour explored these ideas in his 1999 book The End of Time. His thesis, namely that time itself does not exist, led him to his own radical brand of scientific theory - called "timeless physics."

In Barbour's view: "Change merely creates an illusion of time, with each individual moment existing in its own right, complete and whole." As for everything else, it's all an illusion - there is no real motion or other "reality."

Daily Living and the Power of Now
How might these concepts help us in our daily lives?

Philosopher Eckhart Tolle suggests the answers in his 1999 New York Times Bestseller, translated into 33 languages, The Power of Now: A Guide to Spiritual Enlightenment.

People live endlessly lost in memory of the past and anticipation of the future. This problem prevents the full experience and realization of the present.

How often do we find ourselves re-playing in our mind a memory of a past event, recent or distant? Or conjecturing what we will do or say if a certain thing happens in the future?

Of course, there is no harm in practical planning for the future or knowing your own history.

But Tolle counsels us that the present is supreme: acknowledge the present moment and simply allow it to be.

Pause and stop, and experience fully what you're doing and feeling now - at the present moment, says Tolle.

Don't "wish away the present" for the future.

Tennis and the Power of Now
How does the "Power of Now" apply to tennis?

How often have you or a player you know been "wrapped-up" in losing the last point, and simply can't let it go?

Or been obsessed with the last losing game or or last failed match? Or even an earlier loss? And then can't move on?

How often have you or a player you know been fixated with the anticipation of winning a future break point or hitting a future winner when the pressure is on? "If only I win the next point, I will win the game or match."

The prison of re-living the past and the demon of anticipating the future blocks us from our maximum performance.

The answer might be to simply re-shift our being to the present moment - the ball, the racket, the court and all things around you.

As the saying goes: "Play the game point by point, moment by moment."

Rod Laver put it this way: "The next point - that is all you must think about."

Are there examples today of how to think in the "now"?

One blogger has suggested that Roger Federer might be the best current practitioner of the "Power of Now."

What does he seem to do so well, enabling him to achieve history's greatest professional tennis record?

He can seem to stay in the present moment. And not let anticipation of what might happen cloud what's happening now.

And he can seem to put the last point - and the last loss - behind, and creatively learn from it.

For example, after his recent stunning second-round loss at Wimbledon 2013 to unseeded Sergiy Stakhovsky, consider what Federer said.

"The 24 hour rule applies. Go back to work and come back stronger really. Somewhat simple. Hard to do sometimes. But usually I do turnarounds pretty good."

The Power of Now philosophy calls on us to just pause. Experience the moment and all that surrounds us.

Learn from past mistakes and simply put it behind. And if we can just let things go, we can return to relaxed maximum performance.

Sources:
1. The End of Time: The Next Revolution in Our Understanding of the Universe (Oxford Univ. Press: London, 1999), Barbour Ph.D., Julian

For those who wish to further explore the Philosophy of Now:

Video: Quotes and Music from "The Power of Now" by Eckhart Tolle