Andy Murray is the King of England: The 2013 Wimbledon Championships 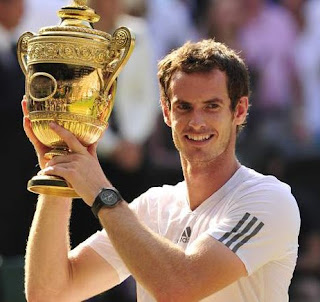 For nearly eight decades, Britain has been waiting, hoping and dreaming.

When would they see another native man win the Wimbledon singles championship in the land where tennis began?

Since the time he became Britain's top player, Andy Murray - alone - carried the hopes of a proud nation, the weight of history and the ghost of Fred Perry, the last British man to win Wimbledon in 1936.

It all happened at the All England Club on a sunny, blistering hot Sunday before a packed audience and millions on television.

The match lasted 3 hours and 10 minutes, and required Murray to summon up a supreme effort to close out the match on his fourth Championship point.

It was Murray's second Grand Slam title, and his third finals appearance in the last four Grand Slams, added to his Olympic Gold.

"It feels slightly different to last year. Last year was one of the toughest moments of my career, so I managed to win the tournament this year, " said Murray after the match.

"It was an unbelievably tough match, so many long games. . . The last few points were some of the toughest I've ever had to play in my life."

In the women's singles championship, Marion "The French Energizer" Bartoli (No. 15, France) defeated Sabine Lisicki (No. 23, Germany) in straight sets, 6-1, 6-4 to take her first Wimbledon crown.

It was her first Grand Slam title, and lifts her to No. 7 world ranking.

Famous for her shadow swings and energetic dances between points, Bartoli controlled the match from the start, and took away Lisicki's power serves with a sparkling return game.

In men's doubles, the USA's Bryan Brothers, Mike and Bob, once again made history, taking their second Wimbledon championship over Marcelo Melo (Brazil) and Ivan Dodig (Croatia) in four sets, 6-7, 6-4,-6-4, 6-3.

It was their 15th Grand Slam title, and 91st career doubles title, an all-time record.

"This has been the best period of our career so far," remarked Bob. "Doubles takes a long time to figure out and we feel like we got it now. We want to do this for as long as we're having fun. You'll probably see us out here when we are 50."

Congratulations to all the winners, players, fans and supporters of this year's Wimbledon Championships.

See you next year!
Gary
Posted by Gary Bala at 5:27 PM