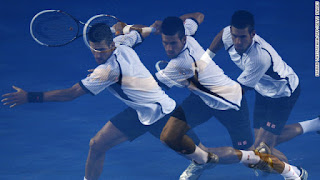 More sport scientists and nutritionists are being persuaded about the dramatic potential of a gluten-free diet.

Though not all are yet convinced, the rise of tennis superstars Novak Djokovic and Andy Murray, two gluten-free advocates, have prompted many experts to convert.

Many now say that gluten, not sugar and fat alone, may be at the heart of many health and conditioning issues.

A gluten-free diet is believed by advocates to boost energy levels, assist in weight control, and improve recovery and mental clarity.

What is gluten? It's a protein found in wheat, barley, rye and possibly oats.

Where is it found? It's found in pasta, pizza, cereals, biscuits, cakes, chips, dips, beer, flavored milk and other foods.

What does it do which is harmful? It slows the digestive tract. This is because gluten forces the body to break it down - and the foods carrying it - into sugar.

The digestive tract is thus diverted from one of it's natural functions - naturally breaking down fat in the body.

And over time, it is thought the digestive tract might even be compromised. Long-term effects: bloating, abdominal discomfort, muscular and joint problems, fatigue, lack of focus and many others.

"Cutting out wheat-based products such as bread and pasta could be the best thing you ever do. The energy level you which have is something I have never experienced before. It's a completely different energy source your body is operating from. The ability to maintain a lean athletic figure is effortless."