The Return of Serve: How the Mind Works 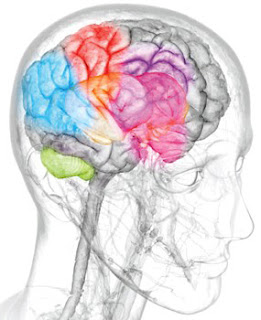 "The movements of elite athletes are beautiful to watch. But what goes on inside their heads? The best players learn their moves by encoding whole sequences in the cerebellum through intensive practice - and then in game situations, activate them without conscious thought. To return a serve, for instance, a tennis player uses his thalamus to focus on her opponent [or ball], while the prefrontal cortex quashes distractions. Visual information from the occipital lobe activates the unconscious mental program in the basal ganglia, which passes instructions to the posterior parletal cortex (which calls up automatic movements) and the pre-motor cortex (a staging ground for complex movements). The pre-motor transmits commands to the motor cortex, which orders muscle movements. Swing!"

- Sharon Begley
Ilustration by Brian Christie for Newsweek from: "The Science of Triumph", Newsweek Magazine, July 11, 2011