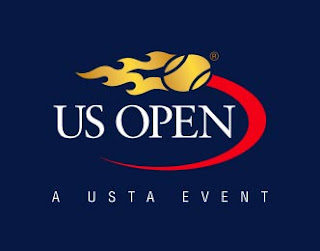 It was a day of thrills and excitement.

I toured the USTA Billie Jean King National Tennis Center grounds, including the 3 stadium courts - Arthur Ashe, Louis Armstrong and the Grandstand - as well the other match courts and practice courts.

I even watched some of the Junior Boys Qualifiers, rising star Gonzales Austin and Japanese upstart Daiki Kondo. (I witnessed some awesome serves from even the juniors!)

And I saw Maria Sharapova and her coach Michael Joyce, as well as Venus Williams and her father-coach Richard, all working on serves on the practice courts.

Bottom line, these world-class players can truly "hit" a tennis ball - powerfully hard and fast and with magnificent spin.

Off court, I ran into French player Paul-Henri Mathieu who was working his Blackberry and preparing for his match with Roger Federer in the next round. And I said hi to American fan favorite Melanie Oudin at the USTA Smash Zone exhibit for kids. I even briefly chatted tennis with the famous coach Nick Bollettieri who was outside of Louis Armstrong stadium watching matches on the Big Screen. . .

All in all: An exhausting but fun and educational time.

What were my observations for tennis playing fanatics?
What I noticed about players at this top-level of play, compared with players at less advanced levels -

*The commitment and intentionality of each stroke: the incredible preparation each of them makes before each shot (this seems like most of their effort)
*The fluidity of their movement and footwork on the court
*How cleanly and consistently they keep hitting the ball
*The length of their swing and the completeness of their follow-through on each stroke
*How low they can get to the ground on their shots
*How loose and relaxed the players play, and just how comfortable they look on court
*How smoothly they unleash their kinetic chain of power at the ball

For more information on the USA's Grand Slam tournament, visit:
U.S. Open: "It Must Be Love"