2010 U.S. Open: The Rafael Nadal Story and the Lessons of Rod Laver 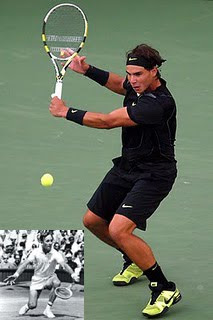 Congratulations to all the winners and players at the 2010 U.S. Open!

The story of this U.S. Open is the career Grand Slam win by Spain's best player of this or perhaps any generation - the indominitable Rafael Nadal.

. . . and behind that win is may lie an interesting parallel with the game of the great Rod Laver - the all-time tennis champion.

Nadal is only the seventh player in history to win the "career Grand Slam": the men's singles title in each of the four Grand Slam tournaments - the Australian Open, the French Open (Roland Garros), Wimbledon and the U.S. Open.

At age 24, Nadal won his 9th career Grand Slam men's singles title. This pace is ahead of that set by Roger Federer who had won 6 Grand Slams singles titles at the same age.

And who was the last player to accomplish this feat? Answer: Rod Laver. . .

What lessons can be learned from Rod Laver's game that might be relevant at this point? What parts of Nadal's game bear focusing on here? And what might players at all levels take away from this U.S. Open championship win by Nadal?

1. A ferocious intensity of play - Laver was widely-known as a supremely humble and gentlemanly player. Less well-known to most except his opponents was Laver's ruthless desire to eviscerate the opponent, in his case with the sheer magnificence of his seering all-court game.

Similarly, Nadal is known for his all-out intensity on each point as if it was his last, in his case with the sheer power of his topspin drives. Nadal, say his opponents and most observers, "gives you nothing." Yet, like Laver, it is all bound up in Nadal's humble and gentlemanly exterior.

Lesson: Develop an intensity as part of your point play while maintaining humility.

2. The use of topspin at a higher level - Laver was credited in his time for taking topspin drives on his forehand and especially on his backhand to a whole new level, the first to take professional tennis to the modern "Big Game". Nadal likewise has taken the power and intimidation of the topspin drive to an entirely new dimension. Nadal's heavy deep topspin groundstrokes not only push his opponents back and often force a weak reply, but also intimidate many lesser opponents to "going for more" on their shots, thus missing altogether.

Lesson: Develop more and stronger topspin on all your groundstrokes.

3. Enjoying the battle and the thrill of competition - Laver in his time, and Nadal now, simply conduct themselves as glorious competitors, taking pleasure in the game itself - win, lose or draw. By doing so, they seem to play even better tennis - almost behaving and conducting themselves as if the outcome is foregone - and it often is.

Lesson: Savor the thrill of the moment and the pride of competition, regardless of outcome.

Lessons from history - past and present.