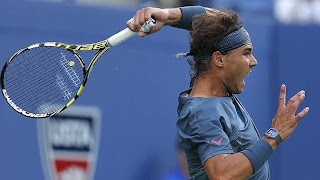 Photo: Reuters
I want to wake up in that city that doesn't sleep and find I'm king of the hill, top of the heap.
--Frank Sinatra, "New York, New York"

Rafael Nadal (Spain, No. 2) defeated Novak Djokovic (Serbia, No. 1) to win the US Open men's singles title at Arthur Ashe Stadium before a overflow tennis audience and national television.

Typical of their many showdowns, the battle showcased numerous powerful and lengthy rallies, one lasting 54 shots, drawing a well-deserved standing ovation from the enthralled Ashe Stadium crowd.

It was Nadal's second US Open men's singles crown, and 13th Grand Slam singles title, only one behind the great American Pete Sampras' 14 titles, and 4 behind Roger Federer's record 17 titles.

Overcoming debilitating knee injury, Nadal accomplished a phenomenal season this year, with 10 titles and a record of 22-0 on hardcourts and 60-3 on the season.

"Very, very emotional," is the way Nadal described himself after the match. "Probably only my team knows how much it means, the match today. Playing  against Novak is always a special feeling. Probably nobody brings my game to that limit like Novak does."

In the women's final championship, "Superwoman" Serena Williams (USA, No. 1) took the US Open title over Victoria Azarenka (Belarus, No. 2), 7-5, 6-7 (6), 6-1 before a sold-out crowd and national audience at Arthur Ashe Stadium.

It was Serena's fifth US Open singles crown. It was also her 17th overall Grand Slam singles title, 3rd best in the Open Era and only one behind Chris Evert and Martina Navratilova's 18 titles.

The 2 hour, 45 minute win established the 31 year-old American superstar as one the greatest female players, if not the greatest, who ever played this sport.

"You know, it has more meaning in history as opposed to just winning a few," remarked a jubilant Serena after the match, "It definitely has a different feeling."

It was a fantastic tournament for all.

Congrats to all the winners, players, fans and supporters of the US Open 2013.

See you next year,
Gary
Posted by Gary Bala at 9:22 PM