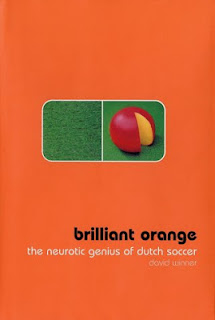 "There is no medal better than being acclaimed for your style." --Johan Cruyff, Legendary Dutch Superstar

I. THE BOOK
The great Pele famously called the sport of football (what we call soccer), "the beautiful game."

Beginning in the late 1960s, the Netherlands (The Orange) and its trailblazing superstar Johan Cruyff, transformed "the beautiful game" into something quite special - something called "Total Football."

What is it? How did it come about? What lessons might we find in it for the world beyond soccer?

David Winner writes masterfully about these topics in a book regarded as one of the best soccer books ever.

Brilliant Orange explores not just soccer in Holland, but the culture, mindset and history of the Dutch which produced it.

Holland is a place where the landscape is notoriously flat, practically below sea level and exists only because a boy once plugged a dike with his little finger.

It is said that this has produced a peculiar thinking which assumes that space and time is at a premium, and thus must be maximized.

In "Dutch space", the soccer pitch (or field) is not just a big rectangle. It's a restricted zone which demands innovation, creativity, quick-thinking and "doing-it-all".

Total Football means adventurous attacking; rapid position-switching of players (attacker to defender, back to attacker); and exquisite speed and footwork. And above all it means quick-reaction.

It has also sometimes meant an almost weird pattern of seeming self-destruction - attacking to the point where you left your flank open for potentially devastating counter-attack.

And if The Orange could find a way to defend a play, it also meant quickly turning from defense back to offense again.

The bottom line: every player plays any position and does everything, and always moves forward on the attack.

Total Football lifted the Dutch into the top echelons of the soccer world and landed them into multiple World Cup finals - indeed, it influenced all of football around the world.

III. THE LESSONS FOR TENNIS
For those of us in tennis, what lessons might the related sport of soccer and the Total Football model teach us?

**Like soccer, tennis is ultimately a game of the human feet! In both sports, the relationship of the foot and the ball is the key to court footwork and spacing to the ball.

**Like soccer, tennis is a game of moving forward and attacking, creating angles and dominating a confined space - the rectangle of the court.

**Like Total Football, winning tennis is about the "All-Court" game. It means playing well at all positions - baseline, mid-court, and net - and transitioning between them all well.

**And like Total Football, winning tennis means, when necessary, moving from offense to defense - and then turning defense back quickly into offense.

Soccer's take-away lesson for us in tennis is this: Total Football and "All-Court" Tennis are sports brothers!