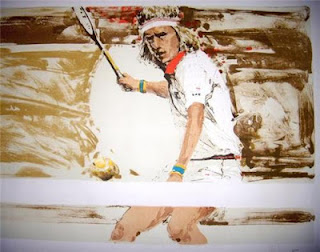 Image: Aldo Luongo
Let's take a brief look back at one of the all-time greats, the legendary Bjorn Borg.

Borg won eleven (11) Grand Slam titles between 1974 and 1981, and reached No. 1 in the world.
He won five (5) consecutive Wimbledon titles and six (6) French Open (Roland Garros) titles.
His career winning percentage was an astonishing 82.7%.

Before his retirement at age 26, Borg compiled a record which many experts say rank him as one of the greatest players of all time.

But Borg was much more than his statistics.

His physical conditioning was legendary.

His coolness under fire earned him the name "Ice-Borg".

His rivalry with John McEnroe made for some of the greatest matches in tennis history.

And he was the first "rock star" in tennis, and the first to make more than a million dollars.

In the words of Arthur Ashe, "Borg was bigger than the game. . . He was like Elvis."