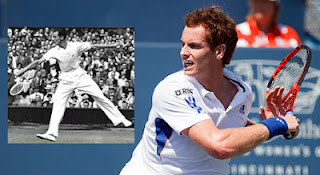 The ghost of Fred Perry smiled at the end of a special day at Arthur Ashe Stadium in New York.

No British man has won a Grand Slam title since the legendary Fred Perry took the U.S. Championships in 1936 - an era when men played tennis with wooden rackets and in long trousers.

Entire generations of British fans and supporters have patiently waited and dreamed of their next champion.

When would a native son, from the land where tennis began, once again lift a Grand Slam trophy?

Today was that day.

The match finished at 4 hours and 54 minutes, tying the record for longest U.S. Open finals in history.

Murray, 25, recent Gold Medalist at the London Olympic Games, complimented his opponent after the match whom he outlasted: "Novak is so, so strong. He fights until the end in every match. I don't know how I managed to come through in the end."

Paying tribute to the super-intensity of his coach, the great Ivan Lendl who elevated Murray's game and watched the closing ceremony in rapt attention, Murray joked: "I think that was almost a smile."

After three quarters of a century waiting for Fred Perry's successor, Britain was surely ready to offer a Grand Slam welcome home for Murray.

It was Serena's 4th U.S. Open crown, and 15th Grand Slam title. It put her only 3 major titles back from the legendary Chris Everett and Martina Navratilova.

Commented her opponent Azarenka after the match: "Serena deserves the win. She showed how true of a champion she is."

Serena had just recently won the Gold Medal in singles (and doubles with sister Venus) at the London Olympic Games.

The summer of 2012 has indeed been a golden one for Serena.

It was their 12th Grand Slam doubles title, breaking the old record by the legendary Australian doubles team of Todd Woodbridge and Mark Woodforde.

Remarked Mike after the match: "We looked up to the Woodies, and to steal all their records is unbelievable because we idolize those guys. They're one of the reasons we play doubles."

The Bryan Brothers, 34, were coming off of their recent Gold Medal in doubles at the London Olympic Games, and have proved that they are indeed one of the finest doubles teams ever.

It was their second Grand Slam doubles crown, having won the French Open (Roland Garros) title earlier in the year.

Errani, celebrating their victory afterwards, said: "We [have] played an amazing year."

Clijsters defined the big-woman's game of power and precision, and was personally well-liked by fans and peers, world-wide.

Meanwhile, Roddick carried American men's tennis almost single-handedly for most of the 2000s, consistently ranking in the top ten and possessing one of the fastest serves in history.

Good luck to them, and congratulations to all the winners, players, fans and supporters for another fantastic and historic U.S. Open.

Year 2012 continues to be a special one for the history books.