The King of Wimbledon 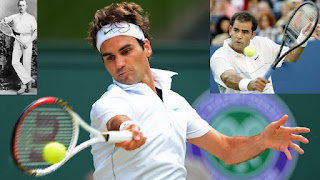 Men's Final
His records have astonished even the tennis experts.

And today, on Centre Court under the roof after a rain-delay, was no exception.

Federer's seventh Wimbledon trophy ties him with American Pete Sampras (Open Era, circa 2000), and William Renshaw (Pre-Open Era, circa 1889).
His re-gained World No. 1 rank puts him at 286 weeks at No. 1 which also ties Sampras. His 17 Grand Slam titles is, of course, unequaled in history.

Murray, the first British man to reach the Wimbledon finals since Bunny Austin in 1938, carried the weight of the entire British world on his shoulders.
Britain had not seen a native men's champion on Centre Court since Fred Perry in 1936.

It was an epic, riveting battle between a still-hungry 30 year-old champion who did not make a Grand Slam final in 2+ years, against a newly-determined rising star coached by one of the all time greats, Ivan Lendl.

In the end, Federer found his vintage form, and played some of his best tennis ever in a convincing victory.

"It's amazing," said Federer. "It equals me with Pete Sampras, who is a hero of mine, so it feels amazing."

Later, a tearful Murray joked: "I'm getting closer. I'd like to congratulate Roger. . . He played a great tournament. He showed what fight he still has in him."

The ever-regal Federer proved that, as much as anyone in history, he must be regarded as "King of Wimbledon."

Women's Singles and Doubles Final
Serena Williams (No. 6, USA) fought off an inspired comeback from Agnieszka Radwanska (No. 3, Poland), 6-1, 5-7, 6-2, to win her 5th Wimbledon women's single's title, and her 14th overall Grand Slam crown. She finished with a Wimbledon tournament record of 102 aces.

Williams, age 30, was sidelined by injury and illness for almost a year, and relished her victory afterwards with her sister Venus Williams, who also holds 5 Wimbledon single's titles

"Coming here and winning today is amazing," said Williams. "It's been an unbelievable journey for me. I almost didn't make it a few years ago. I was in hospital and thought I'd never be here again, so this makes it so worth it. It's so much sweeter."

Williams and sister Venus went even further, and took the women's doubles crown later that day over the Czech team of Andrea Hlavackova and Lucie Hradecka, 7-5, 6-4.

It was their 5th Wimbledon women's double's title as well.

Wimbledon 2012 saw some other records also over the "fortnight."

*The Golden Set - Yaroslava Shvedova (wild card Kazakhstan) became the first player in a Grand Slam tournament, and the first woman in the Open Era, to win every point against her opponent in one set. Shvedova defeated Sara Errani of Italy, the recent "French Open" finalist, 6-0, 6-4 in the third round. Shvedova won 24 straight points in set one, the so-called "Golden Set."

Wimbledon 2012 saw some stunning performances and record-making efforts at the All England Club grounds.

And the tennis year still has many more thrills to come - the Olympics, the US Open series followed by the US Open, and then the Master's and more . . .

It's been a fantastic tennis season so far - including at this year's Wimbledon.

See you next year at Wimbledon!
Gary
Posted by Gary Bala at 7:44 PM