The Democracy of Tennis - Tennis is for Everybody! 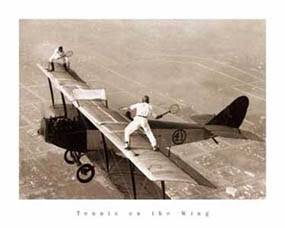 Did you know that according to the Racquet Sports Industry and the USTA, more people are playing tennis than ever before?

In absolute numbers averaged over the past 2 years, almost 30 million people play tennis in the USA.

And more minorities and people of ethnic backgrounds are also playing tennis than ever.

And thanks to initiatives such as the USTA "10 and Under Tennis", the "Quick Start" program and the White House "Let's Move" project, more kids are being encouraged to play than ever.

And tennis has become a global sport too - perhaps second only to soccer.

Even disabilities do not stop someone from playing tennis! Wheelchair tennis is played at all the Grand Slams and in 58 countries.

Tennis is simple, fair, easy to understand, and is not expensive to play and requires no fancy equipment.

As admonished by the great champion Bill Tilden in "How to Play Better Tennis" (1950): "I urge you - play tennis! Tennis is the most valuable sport any individual can learn . . . It is a game than can be played practically from the cradle to the grave - and it is apt to aid in postponing the latter many years . . ."
Best,
Gary