The Many Worlds of Tennis 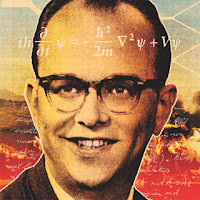 Hugh Everett, III
(American Quantum Physicist, 1930-1982, Founder of the Many Worlds Interpretation of Quantum Theory)
Photo: Scientific American I. Introduction
Over fifty years ago in 1957, Princeton graduate student Hugh Everett, III, proposed a radical and mind-bending theory for his doctoral dissertation in quantum physics.He proved mathematically that, in the world in which we live, the universe "branches" or "splits" into different realities with each observation or decision event.Each person, thing and event takes place in alternate worlds all at the same time, including infinite copies of each of us!Everett called his theory "the Universal Wave Function."And it was later popularly called the "Many Worlds Interpretation."Critics called it hogwash. Indeed, Everett's idea was met with scorn, and relegated, sadly, to the backwaters of science fiction stories.But something strange happened over time.Everett's mathematical proof proved to be nearly-impervious.And progress and experimentation in quantum physics has led a growing number of scientists to re-visit Everett's theory - and to now grudgingly accept it, albeit with some understandable discomfort.Today, leading MIT Physicist Max Tegmark calls Everett's concept, one of the greatest theoretical constructs of all-time, ranking with Newton's Law of Gravity and Einstein's Theory of Relativity.Can it really be true? Are there actually an infinite number of worlds where everything possible than can happen takes place all at once?What exactly is Everett's theory? And why are growing numbers of physicists forced to admit that it may indeed describe our world?Let's take a look.II. The Many Worlds Theory
Everett proposed a startling comprehensive mathematical theory to describe our world. It unified the two aspects of our universe - the microscopic "quantum world" of sub-atomic electrons and protons, and the macroscopic "classical world" of people, chairs, planets and stars.The problem was that, based on a famous light experiment known as the "double-slit" experiment, objects in the microscopic sub-atomic world, such as electrons, seemed to act as both particles and waves.And they seemed at first to appear in multiple places at once, and sometimes even in all places at once - a state physicists termed a "super-position" of probabilities.Yet when they measured an electron after observation, it always settled into one definite physical position. This is the infamous "measurement problem."Since objects are never in multiple places at once in the "classical world" of people and chairs, physicists up to the time of Everett operated under a mental fiction of sorts to help explain the riddle. It was called the "Copenhagen interpretation."This view assumed that the simple act of observation or measurement forced the electron into a definite position - technically described as a "collapse of the wave function."Everett answered the riddle a different way by suggesting a radical new alternative - his theory of the "universal wave function." Under this concept, every possible configuration of an electron or sub-atomic particle exists all at the same time.Since people and ordinary things are "made" of the same sub-atomic particles, Everett argued that the human observer or measurement device itself is part of the quantum world. Thus, he reasoned that the observer or device is always itself in the same "super-position" of probabilities.In other words, not only are sub-atomic microscopic objects in multiple and even every position at once, but also objects in the macroscopic world of people and ordinary objects. When the observation or measurement is made, there is no "collapse"of anything.Rather, the universe itself "splits" or "branches" into multiple and even infinite positions - with each universe just as "real" as the others.In short, all objects in the universe are always in state of "super-position." And each observation or decision "branches" reality into multiple and even infinite universes, each of which includes you and me!And he supported this theory by a cogent and compelling mathematical proof, which today physicists still struggle to dispute.In fact, recent experiments of macroscopic objects in our classical world, called "buckyballs" (C60 carbon molecules), seem to confirm that they behave as both particles and waves - and they seem to be measured in different places at once.Our universe is far richer and more complex than ever imagined!III. Tennis and the Many Worlds
Back now to tennis. How might all this apply?Can tennis also be operating at different levels or "many worlds" all at once?Indeed, it can - and does.Tennis is far more than a game or a set of practice exercises.Consider some of the many aspects of tennis beyond just the score.Health and Fitness - Tennis undeniably improves health and fitness. In fact, studies suggest that tennis players who play 3 hours a week at moderate intensity reduce risk of death from any cause in half. And it builds dynamic balance, speed and hand-eye coordination.Brain development - Tennis requires full and continuous alertness in the "now" - connections between nerves and the brain. And good tennis will encourage tactical thinking and problem-solving.Building of positive personality characteristics - In various tests, tennis players scored higher in vigor, optimism and self-esteem. And they scored lower in depression, anger, confusion, anxiety and tension.Sportsmanship - Good tennis teaches players to compete fairly with opponents.Mental discipline - Playing and improving at tennis requires mental discipline and building a good work ethic. Tennis is about managing mistakes and overcoming adversity with calm and purpose.When you watch the next tennis match, observe well and carefully all these "many worlds."Like our universe itself, the game of tennis is far richer and more complex than what we first see!Sources:
1. The Many Worlds of Hugh Everett, III, Peter Byrne, (New York, NY: Oxford Univ. Press, 2010)
2. Parallel Worlds, Parallel Lives, PBS Special, October 21, 2008
3. Tennis - for the Health of It (A USPTA Initiative by Jack Groppel, Ph.D.)
Posted by Gary Bala at 8:15 PM