Tennis and the Power of Rotation 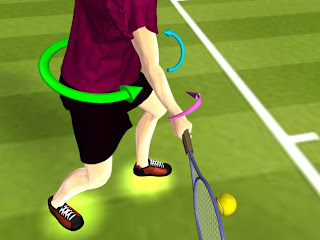 Why is a rotating object so pleasing for us to see?
Think of any rotating object - a ball, a sphere, or even a coin. Why do we like to watch it? Why are we sometimes even mesmerized by it? Because there appears to be a "smoothness" or "fluidity" or "flow" to such an object which the human eye is naturally attracted to. Indeed, there seems to be something strangely hypnotic and appealing about the object's rotating quality. Think again about more rotating objects. Think of a spinning top. Think of the waves of the ocean at the beach. Think of that old toy for kids called the "Slinky". Think of a swinging pendulum. Think also of watching a video of a tennis ball rotating in slow-motion hit by your favorite pro. And on "contact" the spin of the ball changes, and it suddenly spins in a different direction.The sight of rotation for most of us appears to be magnetic.

And on the other side of the cosmic scale, at the sub-atomic level, electrons rotate around protons and neutrons. The electron itself was recently measured by scientists at the Imperial College London as the purest spherical object in nature, and itself always rotating or spinning on an axis.Thus, rotation is fundamental.How does rotational power work in tennis?
Rotational power in tennis essentially comes from rotating your hips and shoulders into the shot. Your arm and racket head follows from behind your body and completes a full follow-through in a circular motion. Some coaches describe this as "sinking and coiling, and lifting and uncoiling". You are using your body's largest parts to power the racket head "through the line of the shot", and the shot "through the body of the court."This is the bio-mechanical generation of power and spin through the release of the human kinetic chain:
1. From ground to foot & ankle
2. ankle to knee
3. knee to hip
4. hip to shoulder
5. shoulder to elbow
6. elbow through forearm
7. wrist & hand into ball contact pointBest,
Gary
Posted by Gary Bala at 10:03 AM