DVD Review: Kings of the Court - The Ten Greatest Tennis Players of All Time 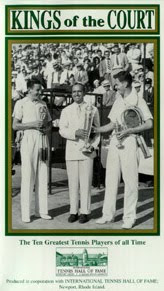 This is an amazing historical DVD which profiles ten of the greatest tennis players in history - the Kings of the Court - from the Roaring 1920s to the Dynamic 1960s, against the backdrop of John Forsythe's magnificent narration and an evocative musical score. It showcases rare and previously unpublished video footage of Big Bill Tilden, Don Budge, Jack Kramer, Lew Hoad, Pancho Gonzales and Rod Laver. The DVD also includes extensive and exclusive interviews with Budge, Kramer, Riggs, Laver and others.

The DVD presents an incredible close-up look at some of the greatest strokes in history by the ten of the all-time top players - the Budge backhand, the Gonzales serve, the Vines overhead, the Kramer volley and many others. And it offers some compelling insights into the games and accomplishments of these history-making players. It should probably be part of any tennis history student's private library to enjoy for many years...