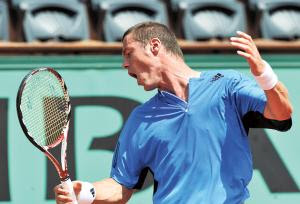 "Losing is inevitable. But defeat is optional."

I. Introduction
It's been said that the mind is always with you or against you...Self-talk in us humans is instinctive, spontaneous and eternal. And perhaps so is our need for it.

In fact, one commentator remarked that if we opened up a person's head, we would see a popcorn machine full of thoughts and emotions endlessly popping, perculating and colliding. And it's no different in the game of tennis, as we all know.

II. Agassi's formulation of the dilemma
Compounding the problem is the fact that tennis, in singles play at least, is probably the most solitary of sports...


"Tennis is the loneliest of sports. In golf, you play the course - plus you have a caddie - and the game ends at 18 holes. In boxing, you have a corner man and a set number of rounds.

In tennis, you're on an island, with no clock. You can't sit on a lead. You have to win the last point to win a match."

"But I will say this - I can confidently say that tennis is the loneliest sport that exists. You're out there, you can't talk to anybody, you can't pass the ball, there are no time-outs. There's no coaching, you don't have to be good, you have to be better than one person and that one person is on the other side of the net.

You have those Lincoln-Douglas debates with yourself. You talk to yourself and you answer yourself and you tell me if you've ever seen another sport where an athlete talks to themselves as much as they do in tennis."

Andre Agassi
From "Open: An Autobiography" (2009),
and Interview with Travis Smiley, Nov. 19, 2009How then do we deal with the loneliness of this sport? The eternal self-talk?

The endless conversation with ourselves about the score, about errors, about losing, about letting ourselves and others down, etc.

How do we defeat the toughest opponent of all - ourselves?

III. Searching for some answers
It seems obvious that we cannot change who and what we are as humans. Thus, the road to solution appears to point to the fact that we need to manage self-talk, just as we are called upon in life to manage daily stress and worry. Indeed, if we do not actively manage our self-talk, it will most likely end up managing us...

One researcher, the late Dorothy Harris, Ph.D., Professor of Sports Psychology at Penn State, put it this way: "The only difference between the best performance and the worst performance is the variation of our self-talk...and attitudes we carry around with us." So how do we manage our self-talk to better accomplish our "best performance"?

Perhaps some specific answers to this problem can be found in examples of others, in history and more recently, who have faced the issue. How have others at the highest level in tennis successfully dealt with the problem of self-talk? And can we try and model them? Can these examples help us to develop and implement an intelligent management strategy to address the problem of self-talk?

IV. A few examples and solutions
**Chris Evert and Diffusing Self-Talk -
Early in her career training, Chris Evert was taught by her father to diffuse any negative self-talk or body language. Any such verbal, or non-verbal clues, her father said, would only serve to motivate her opponent. In fact, he admonished that it was practically like handing your opponent a free point or two.

Chris admitted though, that like nearly all of us, she was bubbling with emotions and worries just under the surface. But she knew that for her temperament, she needed to find a consistent way to short-circuit whatever emotional self-talk she could in order to stay focused and stable with her relentless baseline game.

She in fact diffused her emotional self-talk so well that she was dubbed the "Ice Maiden", in a magnificent career spanning 18 Grand Slam titles and a stunning 90% career win-loss record.

**John McEnroe and Leveraging Self-Talk -
John McEnroe is probably the epitome of the volatile fiery player who successfully used his explosive rantings and angry outbursts to spur him on to a higher level of play (We all remember that catchphrase: "You cannot be serious!") .

In one sequence made famous in sports highlight reels, he explodes at a call by an umpire in Stockholm, Sweden in 1992 demanding: "Answer my question, jerk!", and then slams his racket into a near-by juice cart. He won the tournament.

Leveraging self-talk in this way is probably not for many of us, but Mac found a way to make it work for him in a career spanning 7 Grand Slam singles titles, 9 Grand Slam doubles titles and some suburb shot-making and volleys. Getting angry for many players often makes them play worse, not better. But for some players of a certain temperament, negative and angry self-talk can elevate both confidence and relaxation of play, thus improving performance.

**Pete Sampras and Harnessing Self-Talk -
Pete Sampras who retired in 2003 with the then-record of 14 Grand Slam singles titles was known to harness positive self-talk, also called affirmations, to build his confidence and help his performance at key match times.

**Gigi Fernandez and Coping with Self-Talk -
Gigi Fernandez is the Puerto Rican doubles player who won 17 Grand Slam doubles titles, 2 Olympic Gold Medals, and World Number One doubles rank before retiring in 1997. However, it was not all smooth sailing. At times, Gigi struggled with inconsistent hitting, poor shot selection and erratic serves and volleys. And she talked to herself.

To address this problem, Gigi's coach designed specific computerized self-talk exercises to help her stay calm, relaxed and in control on court. Gigi coped with her situation by using specific verbal cues on the court: stay loose in the knees, relax the arm and hand on the forehand, and follow-though on the overhead. She was more focused also on her on-court rituals and tasks to re-direct her negative self-talk. Many players use such rituals and tasks as watching the ball, aiming at targets, split-stepping, etc.

**Jimmy Connors and Energizing Your Self-Talk -Jimmy Connors is the eight-time Grand Slam winner who held the No. 1 World singles ranking for a record 268 weeks. Connors was a maverick, a showman and did things his "way". He was called the "brat" of tennis and dubbed the "Showboater". His gritty "never-say-die" court demeanor appealed to some, but some of his court antics and outbursts appalled others.

His self-talk and on-court emotions was different than others in that it was often directed at the crowd. Connors thrived on and manipulated the energy of the crowd, positive or negative, to drive his play especially in some of his greatest matches.

Most people recall that dramatic come-from-behind victory in 5 sets in the fourth round at the 1991 U.S. Open against Aaron Krickstein when Connors was age 39. In a stunning display of prowess and crowd inter-action, he was talking not only to himself but carrying on a conversation with the crowd and exploiting it to elevate his play.

How do these examples differ? How are they the same? Each of these players, and others, dealt with self-talk a little differently, perhaps in part based on their personality type or temperament style...Let's look at that issue more closely...

V. Personality types or temperament styles of players, and their self-talk techniques
Solving fitness issues in tennis starts with classifying people as predominantly one body type or other such as endomorph-lean, ectomorph-stocky and mesomorph-athletic. Perhaps dealing with mental self-talk issues may also call for looking at player personality types or temperament styles. Obviously, no one fits perfectly into any one category and we all exhibit parts of all types. But it's a starting point for analysis, I think.

Let's look at four (4) categories of players who have shown extra-ordinary tennis results and, by implication, strong management of their mental self-talk. (Naturally, all these players possess extra-ordinary tennis talents which naturally accounts for some of their results regardless of their management of self-talk.) Nevertheless, classifying them into types and identifying their more-often-used techniques offers some insight into the problem:

All these players, to some degree, also seem to use coping and re-directing techniques.

VI. A suggested framework for managing self-talk
Let's re-list these strategic techniques as shown to us collectively by these players, and also consider our player personality type, as we frame an effective management strategy for our self-talk.

As for each of us as players, we probably have to select our own primary technique and secondary techniques based on our unique self-talk situation...and decide when to do each and in what relative percentage to do each. Which techniques do you like best and which might work for you?

A helpful and vital step in the process might be for us as players to classify ourselves into one of the personality types above to help decide which technique to use and how often. Which player personality type do you think that you fit into?

For example, an "angry or intense competitor" type can tolerate and even benefit from frequent use of angry self-talk to spur him or her on to play better (e.g John McEnroe). Perhaps even intense grunting helps the play of some in this category (e.g. Maria Sharapova).

Conversely, a "peaceful and stable" player needs much more to keep an even keel, diffuse or by-pass negative self-talk and plod on (e.g. Chris Evert or Bjorn Borg). In contrast, an "order-and-accuracy" player might want to more often use positive self-talk affirmation to try and help fortify a game of precision (e.g. Pete Sampras).

VII. Conclusion
In summary, can we ever transform the loneliness of tennis or truly defeat our self-talk?

Probably not. But, as shown by successful player examples in the past, perhaps we can at least reduce feelings of solitary confinement by managing self-talk with effective strategic techniques. And perhaps we can sometimes even use our self-talk to better reach our match goals.