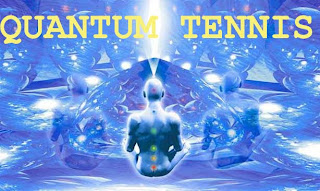 What is Quantum Tennis?
Bruce Lee's famous quotation is about the power of fluidity - and an admonition to harness it in the human body in order to reach a higher level of performance and power.

Quantum Tennis is a system intended to capture this fluidity in the game of tennis. It is both a mental philosophy and a practical method to help achieve the deepest levels of relaxation and rhythm, and thus develop a state of "super-fluidity".

Just as quantum physics reduces the universe to its irreducible component, Quantum Tennis reduces good tennis to its smallest indivisible part - its core essence. And seeks to master it.

What is the essence of tennis? On a very basic level, it's simply bio-mechanical movement on a court with a ball and a racket by a human machine.

Indeed, just as the physical world cannot "be" - it cannot exist - without its smallest parts in full operation, Quantum Tennis cannot help but exist.

From the science of human bio-mechanics:
*Using the human body to channel and project bio-energy using the Kinetic Chain. Unleashing power from the ground up through the human anatomy. Martial arts students know that this bio-energy or power is often called: chi.

From the practice of transcendental meditation:
*The idea of the Universal Self or Essence that is always around you, and tapping into that limitless sense of fluidity and grace.

How might a player's game improve with Quantum Tennis?
Quantum Tennis promotes a relaxed and free racket swing. It calls for an "effortless effort". It encourages all parts of the body to move together and in proper order without hesitation. It focuses on process, not outcome.

It asks for a looser and looser grip, and less and less tension in the hands and face. It wants the human form on the court, and the tennis racket in the air, to simply "glide" without any friction. It compels the player to play the game deliberately and smoothly, and without pressing or feeling hurried.

So how does it work?

Quantum Tennis tries to add an important layer or level. It seeks to open the player's mind frame to the "quantum world" - a place where all body parts work in unison and flow together in an almost "frictionless" state. For example, in a quantum mechanical serve swing, you feel energized from the swing's rhythm and smoothness. In contrast, a classical serve swing often makes you a little more tired and strained.

Practical tips-
*Observe the tennis swings of players. Recognize the difference between the standard classical swing vs. the quantum swing.

2. Flow - The Superfluid Swing
Quantum Tennis asks the player to imagine and execute a "flow" or superfluid swing to their game.

Think of a pendulum. It swings back and forth effortlessly and dynamically, and without any friction. Only the natural force of gravity is needed. On a forehand or backhand, the butt of the racket is pulled into the oncoming ball, freely out in front of you, with your body weight shifting forward, just as in the swinging arm of a pendulum.

The pendulum image is useful for even more instructive insights. The swinging arm illustrates the idea of "change and non-change" - both are happening together. There is dynamic movement, yet it is also a natural "state of being".

Similarly, the pendulum example also illustrates the concept of "rest and activity." The arm at its highest upswing shows rest or potential activity, and its motion on the downswing shows powerful activity and energy. The cycle of rest and activity is a basic rhythm of life, underling all of existence.

In quantum flow, the player is asked to capture this basic rhythm and develop an effortless swing - an orderly fluid flow - which actually gives and not expends energy - just like the pendulum. Quantum Tennis challenges the student to reach an absolutely "frictionless" state.

In physics, the fourth state of matter is known as the "superfluid state." It happens when you take liquid helium and cool it to extremely low temperatures in a laboratory - close to absolute zero. Helium takes on unique and dynamic properties of the quantum world of physics. Its fluidity actually seems to defy gravity.

*Literally, say the words to yourself: "super" (while you inhale) and "fluid" (while you exhale). There should be a gap between the word "super" and "fluid". The word "super" coincides with the takeback of the racket, which is a point of rest or potential activity. Then there is a slight pause. Then there is the swing forward, which accelerates into the word "fluid".

*Try practicing the superfluid swing with the Quantum Grip. The Quantum Grip is extremely loose and light- as loose and light as you can make possible. In this grip, you literally slide your hand down the racket handle as far as possible, allowing part of the meat of your palm to be "off" the handle altogether. It will almost seem that the racket will fly off your hand when striking the ball.

*Keep a Quantum Scorecard for yourself in a set. At the end of each game, ask yourself and mark down on paper, how many swings you made in that game that you consider "quantum swings"? How many were standard or classical swings? Work on increasing the number of quantum swings in future games.

3. Focus - the Q point
Focus is the next fundamental in Quantum Tennis. Focus means zeroing in on the final finish or ultimate posture of a perfect quantum swing that you have made in the past. It is called the Q point.

Next, slowly move your swing backwards from this Q point to the starting point of your swing - literally, a "reverse swing." Think of a Hi-Def video in reverse slow motion of your quantum swing. You are wiring your body and mind to think "quantum swing".

Practical tip-
*Practice this Q point position and "reverse swing" as part of your practices and warm-ups.

4. Feeling - Quantum Vision
Tennis is a game not only of "seeing" and "hearing", but of "feel."

The next fundamental of Quantum Tennis is better developing a player's feel for tennis by "Quantum Vision." It is yet another way to build the superfluid swing.

Quantum Vision means having a concrete intention to use the swing to hit the ball to a target. Once you have that target intention in mind, you allow that intention to become fainter and fainter - leaving only a feeling for it to remain.

Practical tips-
*Try target practice in a new way. Try your quantum swing first at close targets on the court, say the service line. See, hear and sense the target. Try to develop a "feel" for the target. Then, try your quantum swing at farther targets such as the baseline. Focus on the process of the quantum swing, allowing the target to be just be a "feeling". Many top coaches including Robert Landsdorp have said that tennis is a game of developing an instinct or natural feel for the lines of the court as you play.

*Make an Advanced Quantum Scorecard for yourself in a set. In each set, make a count of your Quantum Swings just as you did in the earlier Quantum Scorecard. But this time, rate each Quantum Swing with a "1", "2" or "3", with "3" being a near-perfect superfluid swing. Work on increasing the number of your Rating "3" Quantum swings.

Transcendental Meditation teaches students a way, through a self-development technique called daily mindful meditation, to find one's "true self" or Universal Self, and thus harness a dynamic yet peaceful state of being.

This Universal Self is a grand or Cosmic Computer that governs the universe. It holds the earth and stars in place. It controls the changing of nature's seasons, and keeps the human heart pumping. It is an infinitely dynamic world of limitless power, rhythm and fluidity. It is much the same as the sub-atomic quantum world of physics.

In tennis, finding your "true self" starts with finding your internal rhythm or clock. The real opponent is always your "small self" - your individual ego's eternal desire to win rather than lose. And its endless dialogue of worrying about how others see you.

Quantum Tennis, by adopting the self-development technique of daily mindful meditation, offers a way to submerge the "small self" and tap into that vast ocean of consciousness - the boundless reservoir of energy and creativity of the Universal Self.

Many great athletes in all sports have at times performed at the deepest levels of relaxation and at full power and fluidity. Some call it "The Zone". The Cosmic Computer takes over and literally and automatically does everything powerfully and perfectly.

Final thoughts
The principles of Quantum Tennis suggest a doorway to another world of play. It offers the possibility of deeper levels of relaxation, looseness and fluidity of movement.

Mindful mediation promises its students a more peaceful state of mind. And the chance to tap into the limitless power of the Universal Self.

There are those players who might say that they are only interested in improving their tennis game - not necessarily their life. The answer of Quantum Tennis, and its students, is simply this: ---
"My friends, tennis is life."